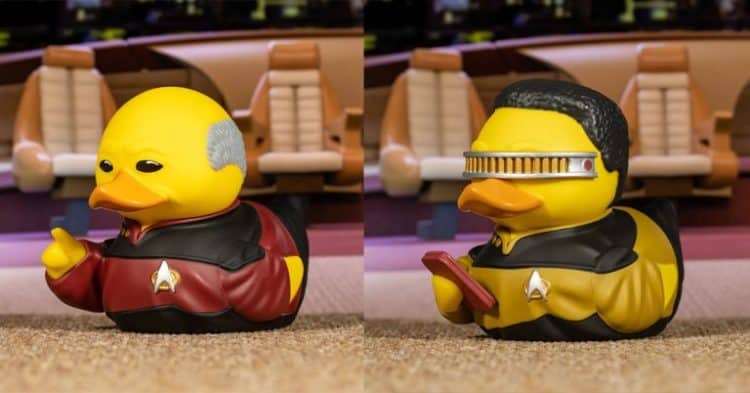 It’s not really a surprise to see Star Trek-themed rubber duckies, is it? After all, these yellow tub toys have been so heavily modified over the years that seeing them in so many different forms has become kind of commonplace, and a lot of people even have collections of rubber ducks in their many different appearances, and even in their different sizes. But for the discerning Star Trek fan that happens to think that The Next Generation was THE best Star Trek show, these would no doubt be a great piece to add to their collection since the details used in each duck are kind of impressive given that those that are shown here are kind of cool. Of course, the Worf duck might make bath time a little more menacing than usual simply because there aren’t a lot of rubber ducks that come armed to tub time. At this time it appears that Worf, Picard, Geordi, and Deanna are the choices that a person can make, and it’s easy to assume that they’re going to come with a slightly hefty price tag, if only because they are specialized ducks and not some run of the mill type of ducks that would squeak and float and be otherwise mundane. Seriously, there are Star Trek fans out there that would be likely to pay a good price for these if only because they are Star Trek ducks. 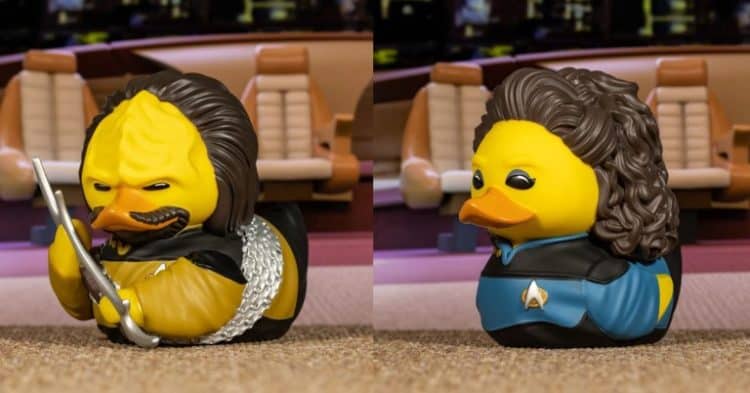 One can only imagine that there are those who would gladly ask for other ducks to be made since while these four characters are quite popular, there are so many other characters from Star Trek that fans would want to see. It’s strange to think that a tub toy would be such a collectible since if anyone remembers, tub toys don’t have a very long shelf life when it comes to providing an amusing time for kids, especially if they don’t get cleaned regularly. Rubber ducks can get particularly nasty if they suck up enough water inside and aren’t cleaned out somehow. Plus, as collector’s items, it does feel that these ducks wouldn’t be gracing the inside of a tub that often, if at all. A lot of collectors will never use their items for the intended purpose since if there’s any value to protect other than sentimental, some people will go so far as to put their collectibles in sealed environments that might allow dust in but nothing else. It’s a bit kooky, but collectors tend to be kind of sensitive about their valued items at times.

They’re yellow, rubber, ducks. Say it once, say it twice, and say it again so we’re clear. Yellow, rubber, ducks. But they are kind of cool-looking, enough to warrant another dollar on a very modest price tag, but not much else. Trying to tell that to a collector is bound to create a wide variety of responses since some people would probably spend whatever was asked for the ducks, within reason hopefully. The thing about them is that it’s very likely that they aren’t that unique since there are probably entire batches of them that have been made, which means that many people will buy them up thinking that they’re making a good investment since anyone else that buys them might get rid of them or actually use the ducks or even give them to their kids, who will eventually lower the value by playing with them. That’s not hard to believe really since it does happen and from an anecdotal standpoint, there are plenty of people that could tell tales of this happening. While it’s nothing to use as a means to mock a person it is mind-boggling in its own way. But hey, as someone that collects various Funko Pops and other items from pop culture, it’s hard to say too much since there are a lot of silly things that don’t make sense to a lot of people who are more practical-minded and don’t see the value in the various things that are created in the name of pop culture. Taking the love of Star Trek this far is kind of funny and a little bit ridiculous, but to be fair it’s something that a lot of people tend to do since it’s a way to hold onto something that one finds a lot of joy in that’s fairly small and doesn’t take up a lot of space. It’s something that others might not fully understand, but at the very least it could represent one’s desire to stay young in some way.

If you’re a Star Trek fan it might be worth it if the price is right, especially since there are other models from the original series that might be worth taking a look at. There are weirder things that are collected, believe that.