The second season of Star Wars: The Clone Wars kicked off last week with the bounty hunter Cad Bane wreaking havok on the Republic, but it turns out that Bane was nothing compared to the true mastermind and evil behind it all, Darth Sidious. Tonight, on the second episode of the season, “Children of the Force” Sidious emerges from the shadows and takes his place as the ring-leader of it all. While this certainly doesn’t come as any surprise to any of us, the thrill and magnitude of seeing it all unfold is fantastic. Below is a clip from tonight’s episode and a synopsis of the episode. 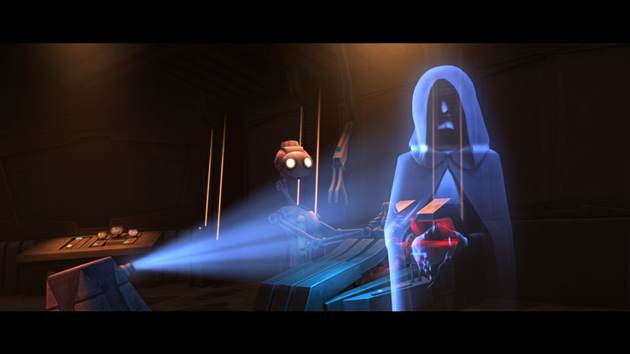 Darth Sidious emerges from the shadows to enact a fiendish scheme in 'Children of the Force,'an all-new episode of STAR WARS: THE CLONE WARS premiering at 8:00 p.m. ET/PT Friday, October 9 on Cartoon Network.

As STAR WARS: THE CLONE WARS launched its second season, ruthless bounty hunter Cad Bane was wreaking his maliciously distinctive brand of destruction upon the heroes of the Republic – but he was merely a pawn in the greater game for galactic supremacy. In the thrilling conclusion to the events set in motion by Bane’s treachery, the ultimate architect of evil emerges to threaten the ‘Children of the Force,’in an all-new episode of STAR WARS: THE CLONE WARS, airing at 8:00 p.m. ET/PT Tonight on Cartoon Network.

After outwitting his Jedi foes and escaping with the Holocron, bounty hunter Cad Bane sets into motion the next stage of his nefarious assignment: to find Force-sensitive younglings and take them to Mustafar for Sith training.

But Bane is merely the instrument of evil, a deadly distraction to occupy the Jedi while the true source continues to plot from the shadows. While he has been glimpsed in previous episodes — and in his seemingly benevolent double-role as Supreme Chancellor of the Republic — Darth Sidious emerges in ‘Children of the Force’as a direct threat to the galaxy’s future.

‘He’s all the hidden secrets most of us have,’says Ian Abercrombie, who provides the smooth and silvery voice of the Janus-faced Sith Lord. ‘Palpatine is the face, and Sidious is the dark soul. When people are that bad, they cannot change. Somewhere in the back of my head, I know that Sidious is always there and that he will take over. Evil often does.’

For Abercrombie — perhaps best known for comedy roles such as Seinfeld‘s doddering Mr. Pitt — providing the voice of THE CLONE WARS‘central villain has been a delicious departure — and a unique career challenge.

‘Somebody told me once that when you play a villain, you must try to find a redeemable quality,’says Abercrombie. ‘I haven’t found it. He’s cold and completely shut down. So, in my head, it’s stillness; he’s very precise. He’s authoritative, he knows everything that’s going on, and so often he’s pulling the strings. It’s difficult to play, but it’s also interesting, because you can’t predict what he’ll do. I love it.

While embodying the evil of such an iconic character may be new to the venerable British actor, the Star Wars universe itself was not — though he could not have predicted that he’d be portraying the subversive driving force of that ‘galaxy far, far away.’

‘It’s quite something, as they say. I was at the very first screening in May 1977 at Grauman’s Chinese Theater. The first Star Wars movie ever! I can’t even believe it, because I never stand in line like that,’he recalls. ‘But someone sold me on it, and that’s why I did. I never imagined I’d be a part of it. It’s an actor’s dream, playing something bigger and larger than yourself. You can have a field day.’

And with the outcome of the Clone Wars a foregone conclusion and his character’s triumph inevitable, Abercrombie can let his dark side run rampant and have a field day, indeed.