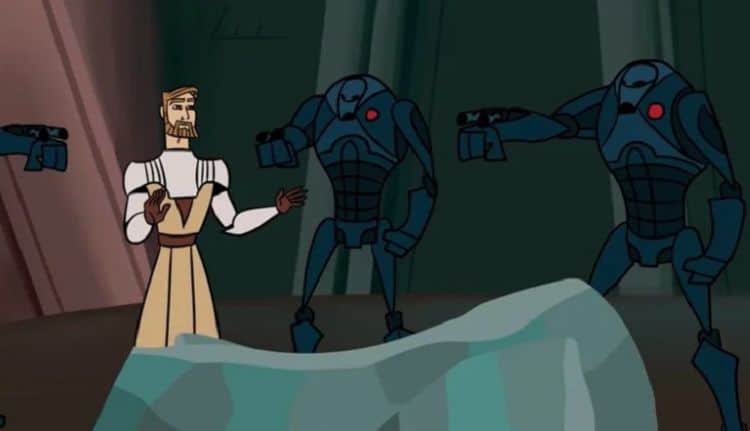 Not to rag on the 2003  Clone Wars style, but there’s just something missing that was a little more present in the original version since the CGI wasn’t perfect but it definitely showed a little smoother movement at times and a lot more detail. For one reason or another, the 2003 style felt as though it was a draft that hadn’t been fully edited yet and needed a bit more development before being unveiled. Some folks enjoyed the 2003 version since it did go a little more into depth with characters and such, in fact, it showed the bounty hunter Durge, which the CGI version didn’t do much of come to think of it, if he showed up at all. But it’s a big matter of personal choice as to whether the 2003 version or the CGI was more popular since some people don’t care about representation that much and might have thought the CGI wasn’t that great, while others could have thought it was better since it was a little more grounded and didn’t go in for the over the top style of animation that doesn’t respect a lot of physical boundaries and the laws of physics as much. I know, arguing for realism in an animated series isn’t always the best way to go, but a lot of people do happen to enjoy it and do manage to put their two cents in when they feel like it since the effect does manage t make the story at least a little better.

The idea of realism in Star Wars, to begin with, is kind of laughable since the science fantasy tale is one that dals with a great number of impossibilities that range from simple and acceptable to grandiose and not at all possible. There are times when it feels as though one of the best wars from the Legends canon, the Yuuzhan Vong war, would be ripped apart by physicists since every last weapon, vehicle, and pretty much anything the Vong used was bioengineered and displayed capabilities that went far beyond many things that had been used in Star Wars up to that point. They actually had living ships and devices that could affect the gravitational pull of planetoids, forcing them to crash into each other. This is actually how Chewbacca met his death in Vector Prime, a fact that is likely one reason among many why Disney didn’t want to use the Legends canon since they wanted to make as much money off of the original cast as they possibly could. But regardless, realism in Star Wars is something that doesn’t have a huge place in the forefront of the story.

But the idea of realism is still one that has a place in the overall story from time to time, and was hard to see in the 2003 style since the animation felt so loose and all over the place at times. From the movements to the storyline, it did feel as though it had deviated now and again from the main plot of the story, even though everything was kept as tight as could possibly be. Fans are obviously divided on this idea as they’ve been divided over just about everything when it comes to Star Wars, but the fact is that the animation in this style just feels a bit messy, as though it was too rushed and didn’t get the once-over from the editors before being sent out. That’s not the case obviously since if it hadn’t been given the OK it wouldn’t have been put out, but the fact is that some animation looks great and is easy to follow while other animated series feel haphazard in a way, as they’re more prone to confuse the viewers than entertain them. But again, animation is a very subjective matter since some people like one style and others enjoy other styles. For this particular style though it feels as though it would have been better suited to a comedy series instead of Star Wars, but that’s an opinion, not a fact. Again, some folks liked this and thought it should have been continued, but obviously, the style played out after a while, and so did the Clone Wars.

The latter was bound to happen eventually since despite the fact that there were many upon many stories that could be told of the Clone Wars it was also common knowledge that this particular point in galactic history wasn’t bound to continue past a certain point. Eventually, the war would end and the original trilogy would take over and thing would go from there. But so far the job that’s been done linking the Clone Wars to the original trilogy hasn’t been too bad no matter what any naysayers might have used to comment with. When it comes to the Clone Wars though, the CGI is a lot crisper and easier to watch.