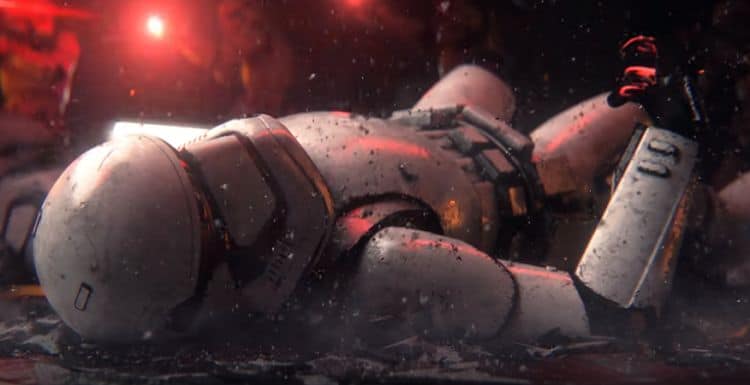 How many people ever give that much thought to the stormtroopers in Star Wars? They’re basically just nameless, faceless drones that are expected to serve and die in the name of the Empire or the First Order and that’s how they’ve been built up throughout the years. There are various designations of troopers that are specialized and trained for different purposes, but overall they’re all just servants of their overlords that are there for one reason, to kill and be killed in turn. This video, The Last Stand, is an amazing look however at a firefight in slow motion that shows the inner workings of a battle and how it breaks down in terms of the weapons and the stormtroopers as they attempt to stand their ground and end up being drilled one after another as the energy bursts that take them down shatter armor and fry the human within the white shell. It’s a wonder that the armor ever comes in handy at all since many times it appears to serve the purpose of a fancy environment suit and not much else given how easily weapons manage to cut right through it. And unfortunately even in The Last Stand it doesn’t appear that the regular troopers have been given any better training than their predecessors from decades before since it’s kind of obvious that whoever they’re shooting at is doing more damage than they are.

That’s the plight of the stormtrooper though isn’t it? Give them the most advanced and up to date weapons, armor that’s supposed to inspire fear in their enemies, and recruit them by the hundreds, and they’re still less than inspiring unless there’s enough of them that their haphazard firing can fill a room with red rays of death. For all that stormtroopers are supposed to be awesome and highly trained the stigma of their horrible aim has endured throughout the years and even The Last Stand kind of continues that tradition since as inspiring as it appears, and the CGI is actually very well done, it showcases the fact that they’re really horrible shots and couldn’t hit the broadside of a Bantha if they were a few feet away. Joey Paur of GeekTyrant has more to say on the matter. There are troopers in the books and in the comics that have impeccable aim to be fair and Captain Phasma was something of a badass despite being taken out by Finn and ambushed by Han, Chewbacca, and Finn in The Force Awakens, but overall the average stormtrooper is basically given a rifle and a suit of armor and told to serve the Empire or the First Order. At least that what appears to happen.

One interesting thing about stormtroopers is found in the stories that are told about them in an attempt to further humanize the troopers and give them a solid back story now and again just so that people don’t happen to think that they’re soulless cannon fodder that don’t have a choice when it comes to signing up. In a way that’s still what they are once they make the decision to sign on, but each one of them does have a history leading up to their induction, or at least they did in the days of the Empire. The First Order appeared to recruit them young so as to make best use of their development and make them entirely dependent on their life in the Order. With less chance to develop one’s individuality away from the group it does sound like a better way to indoctrinate an individual. But obviously it still wasn’t perfect since Finn broke free.

One thing that you can see as a big difference between the clone troopers of the Clone Wars and the First Order troops is the training to star with since the clone troopers were never given a choice of induction but somehow they became much tighter, much more reliant on each other, and were far more efficient in their ways since they were raised together, taught together, and instilled with a sense of unity that helped them to become the best possible soldiers that the galaxy had seen at that point. The morality of the clone troopers’ creation however was a sticky mess that was hard to move around since the lack of choice that they possessed was something that might have grated on a lot of people. Those troopers joining the Empire had a choice and even those that were misguided in thinking that the Empire was a sound idea had the opportunity to make up their own minds. The First Order troopers were given less of a choice since they either served or were reconditioned if they were found to be lacking in any way. If the problem persisted they were simply eliminated as a faulty trooper didn’t belong in the Order. So yes, all in all the life of a stormtrooper, no matter which era they’re from, is not an easy one.