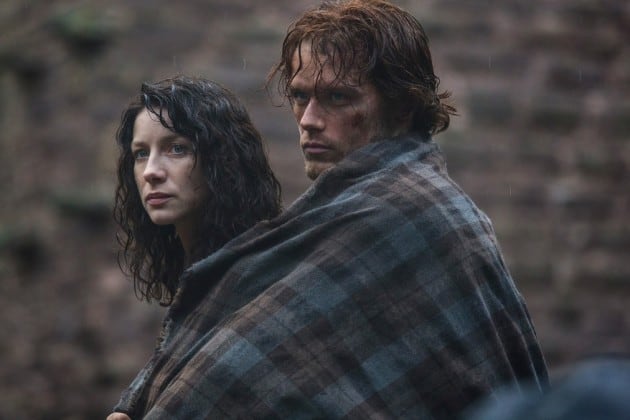 Starz has renewed its new time-traveling romance series Outlander for a second season today, less than a week after the show’s series premiere. Season two will tackle the second novel in the Outlander book series, Dragonfly in Amber,Â and air at some point duringÂ 2015.

The season two renewal appeared to be an easy decision for Starz. Outlander has been watched by more than five million viewers on multiple platforms since the early release of its premiere episode on August 2nd. Of the five million-plus who have tuned into the series, about half of these viewers have beenÂ male.

However, while it is great news for fans that Outlander has been renewed for season two, they may be getting less of the adventures of Claire and Jamie than they were expecting (or possibly, but less likely, more). Starz has not given an official episode count for the second season of the show, only stating that there will be “at least” 13 episodes. During its first season, Outlander will air a total of 16 episodes, a fairly large amount for a cable series (most only produce between 10-13 episodes a season). These 16 episodes will be split into two eight episode segments.

“The overwhelming support Outlander has received from the fans, viewers and critics made the decision for us to go ahead with the second book a very easy one,” said Starz CEO Chris Albrecht. “Diana Gabaldon has given us years of great drama. With an incredible artist such as Ronald D. Moore at the helm and a cast as spectacular as this, we look forward to continue this spell-binding journey with Claire, Jamie, Frank, Brianna, Roger and everybody over the centuries.”

The second episode of Outlander airs this Saturday on Starz. The show will wrap up the first half of its freshman season on September 27th. The second half of season one is slated to premiere in early 2015.