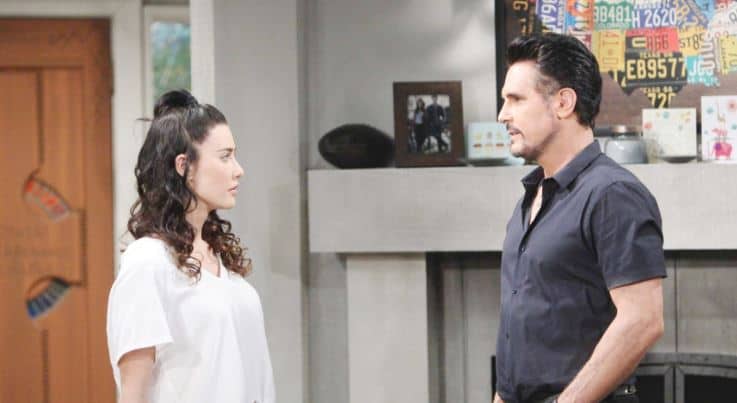 The Bold and the Beautiful fans got to see a lot go down last week, and we are still talking about it at the beginning of this week. There was so much to discuss. Bill told Steffy if she dares to marry the father of her baby, who happens to be his own son, he will put her mother in jail. And she’s looking for reasons to not marry Liam without outright telling him what’s up at the moment. She’s scared, and we get that, but we also see that Hope is doing everything in her own power to take that information and use it to get what she wants, which is Liam. She was someone who seemed to really regret her decision prior to the baby’s arrival, but she’s once again taken her stance on the block that she can get him back if she just tries hard enough. It’s ugly, and we know it.

On that note, there is a lot going down between a few other people, too. There’s the situation with Hope and Wyatt and Sally. Sally is back, she’s sleeping with Wyatt, working for Eric, and Hope is not happy about this. Ridge is not happy about this. And Katie is not happy about this. Well, we think Katie is a bit more upset about the fac that the man she was in love with only a few weeks ago is now sleeping with Sally after they ended things, but that’s beside the point. She’s not happy, and everyone hates Sally. But we think that she and Wyatt are beyond adorable together, so we are all about it in every manner. They have a bright future, but we also know that so many things will come right between them it won’t even matter how happy they are together.

There was a big birthday on the show, and it’s time for fans to head over to Twitter and shout out the head writer and the executive producer of your favorite daytime soap. Brad Bell celebrated his birthday, and fans need to make it a point to go over there and make a happy birthday announcement to him. It’s only been a few days since we all had the pleasure of watching the show unfold in amazing ways, and it’s all him. Shout him out.

TODAY: Sally eavesdrops on Wyatt and Hope’s conversation as Hope disparages her and Wyatt defends her. #BoldandBeautiful pic.twitter.com/xdnA0oYjNv

And so things begin. It’s going to be one of the craziest weeks on the show, ever, and it’s going to be a very upsetting for someone like Steffy. Let’s just point out that she just gave birth to Liam’s daughter. And now she’s about to find out that Hope is not feeling well. She’s going to the doctor, and she’s about to find out she’s pregnant. The problem is that the only man she’s been with in a long while is Liam. And that makes him her baby’s father. This is, obviously, not ideal for Steffy and her newborn daughter with Liam. And that will put a major damper on things that are going down around here. Hope and Liam had their wedding day only two weeks ago, but we all know they didn’t get married. We also know that things aren’t really working out for them in any other way, either.

And now she’s pregnant with his baby. And that won’t go well for anyone. Steffy will be furious. Bill will probably see this as another opportunity to get her back, and things will fall apart for everyone. We can’t see Liam being very happy about this at the moment, but we also can’t seem him turning away from a baby that he’s having. Now he has two baby mama’s, he’s married to neither of them, and he’s got a tough situation to deal with. He chose Steffy so he could give his daughter a family, so what will he do now?