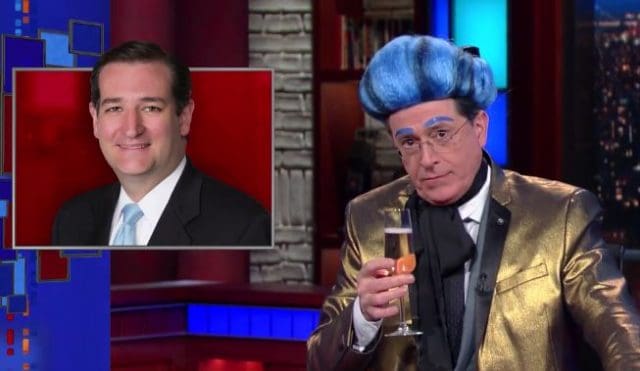 If you’ve been following the news over the past couple of days, then you’ve seen that both Ted Cruz and John Kasick have dropped out of the 2016 race, leaving Donald Trump as the likely Republican candidate for this November’s election. As is customary for Stephen Colbert, he took some time onÂ The Late ShowÂ last night to honor the fallen candidates (or should I say tributes?) in the latest edition of The Hungry for Power Games.

Colbert started with Kasick’s decision to suspend his campaign, joking that “he may be gone, but he’s not…who are we talking about again?” Still though, Colbert did celebrate Kasick’s victories during this year’s race, which included Ohio and no other state.

Then, of course, Colbert moved onto the bigger name to drop out the race: Texas Senator Ted Cruz, who although he won 11 states throughout his campaign, was never able to forge “lasting alliances.” Colbert showcased comments from John Boener and Cruz’s old college roommate, Craig Mazin, who called him things like “Lucifer in the flesh” and “a nightmare of a person.” Lindsey Graham event went as far as to suggest that nobody would convict you if you murdered Ted Cruz on the floor of the Senate.

“So if Ted Cruz is ever killed, we can narrow the suspects down to someone who has met him,” Colbert said.

The best part of last night’s Hungry for Power Games, though, wasn’t Colbert’s jokes about Kasick or Cruz (although of them were pretty great, including Colbert saying that Cruz “went out swinging” before showing video of the senator accidentally elbowing his wife in the face on stage). Instead, the best moment came when theÂ Late ShowÂ host was joined by a special guest during his tribute to the fallen candidates.

Watch Stephen Colbert and his “friend” honor John Kasick and Ted Cruz in the latest Hungry for Power Games below: