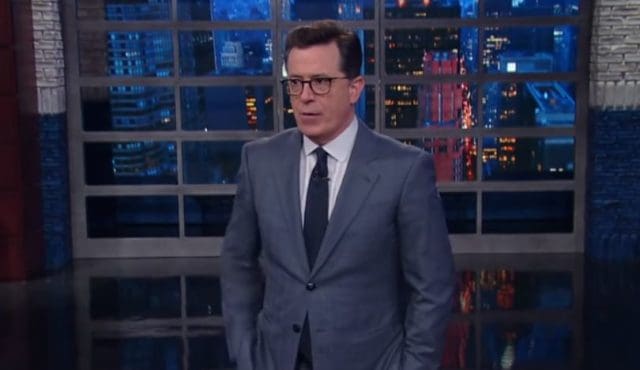 One of the first people you’ll always see and hear criticize Donald Trump is Stephen Colbert. The Late Show host has made it painfully clear that he does not trust the President of the United States and to put it mildly, he has no respect for him. Colbert will be the first person to voice when Donald Trump does something out of order, responds to his naysayers in an immature, unintelligent way, and basically does anything that we’d consider obtuse (which is almost everything).

However, when it came to the recent shooting in Alexandria, VA, Colbert was the first person to commend the President and his administration for their bipartisan response. The incident took place earlier that day, when a lone gunman took fire at a baseball field occupied by members of the GOP. Among those wounded was House of Representatives majority whip Steve Scalise, who was shot in the hip and remains in critical condition. The gunman was later killed by police.

“Once again we’re all shocked in mind and soul by a mass shooting, this time targeting, apparently, a Republican congressman,” Colbert began. “I pray to God that everyone pulls through.

“Violence of any kind is never justified and is the last refuge of the incompetent,” he continued. “Thankfully, none of the members of their staff or police were killed today, and I will say this: Even in the horror of this day, there was reason to take heart in bipartisan responses like this.”