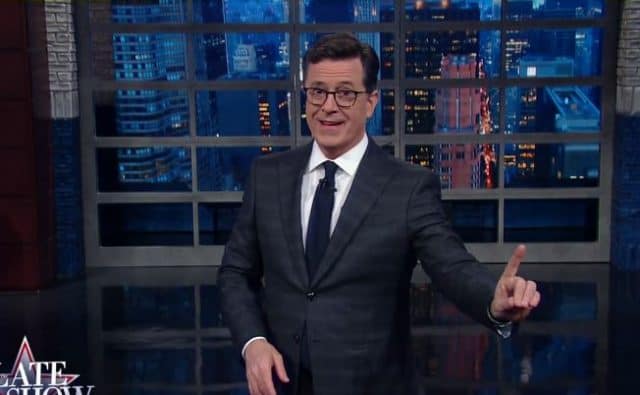 They say laughter is the best medicine, right? But I don’t know if any jokes delivered by Stephen Colbert last night on The Late Show were able to cure the sick feeling that many Americans are experiencing after Tuesday’s election. Still though, Colbert did his best to smile through his disbelief, even though you could clearly tell that the shock and fear of Donald Trump being the United States’ next President was still rattling him as well.

“Like it or not–for the record, not–we have to accept that Donald Trump will be the 45th President of the United States,” Colbert said to his audience, before a barrage of boos broke out from the crowd. “No, listen, I get that feeling completely. I just had to say it one more time. I just want to keep saying it until I can say it without throwing up in my mouth a little bit.”

But even as Colbert kept referring to Trump as the President, he still tried to find new, different ways to cope with the news. He did everything from wearing cat ears and calling himself a “sexy kitty” to looking at the different animals, from Scottish goats to Indian fish, that “picked” who would win this year’s election. Colbert even spoke to “God” about Trump’s victory, asking him why he let it happen, but the Big Man Upstairs didn’t have the answer either; he even blamed the electoral college.

“Oh, that again?” he asked Colbert, when he said that Hillary won on the popular vote but lost the electoral college. “I’m omniscient and even I don’t know how the hell that works.”

Watch Stephen Colbert do his best to crack jokes about Donald Trump’s election victory in the video below: