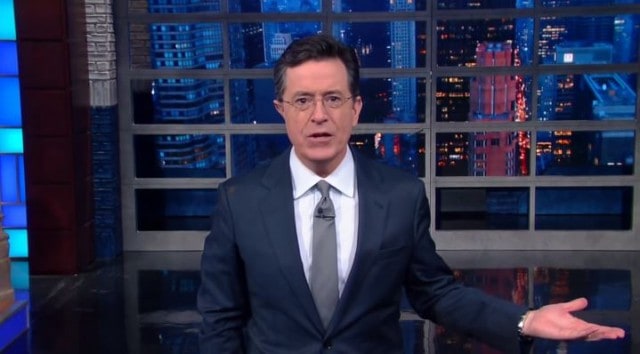 As Stephen Colbert discussed last night onÂ The Late Show, there’s a newÂ Harry Potter story coming, and it will be hitting shelves pretty soon. However, it’s not a new book; it’s the script for the upcoming play,Â Harry Potter and the Cursed Child, which takes place 19Â years after the end ofÂ Deathly HallowsÂ and focuses on an adult Harry working his job at the Ministry and raising his kids. And while I, a huge Harry PotterÂ fan, will most definitely be reading the script for The Cursed ChildÂ (especially since there’s no chance of me being able to see the play live), I do have to say that Colbert brings up some fair points when he questions if we need another story about Harry, Ron, and Hermione.

“The play actually takes place 19 years after the last book, and features a 30-something Harry balancing his job at the Ministry of Magic with being a father,” Colbert says. “That really sounds depressing.”

Colbert is happy that “we’re going to get something else about that whole world” but isn’t sure if Harry is the person that we should follow, since “Harry Potter’s life peaked when he was 17.” In fact, Colbert takes it one step further and urges all authors to never revisit the classic childhood stories that they’ve created.

Check out Stephen Colbert’s entire monologue aboutÂ Harry Potter and the Cursed ChildÂ below. And for all theÂ Harry PotterÂ fans out there, what do you think? Are you excited that we’re going to see Harry again when he’s older, or did the epilogue for Deathly HallowsÂ do a good enough job at showing us that he had found happiness?