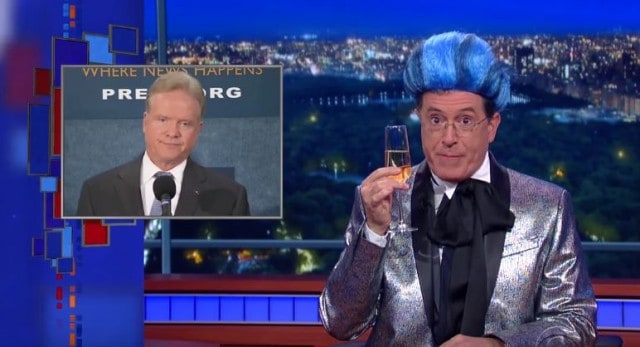 Weeks ago, Stephen Colbert channeledÂ Hunger GamesÂ character Caesar Flickerman on The Late Show, and he did it again last night when discussing the “fallen” members of the current presidential race, which he dubbed “The Hungry for Power Games.” It’s a ridiculous impersonation of Stanley Tucci’s already over-the-top performance from the films (although, Caesar really is that dramatic and sensational in the novels, so it works), and that blue wig combined with Colbert’s wacky laugh is comedy gold.

And Colbert’s impression of the character is even better when he has strong material to work with, which he certainly did have last night onÂ The Late ShowÂ when discussing Democratic presidential candidates Jim Webb and Lincoln Chaffey and their recent decisions to drop out of the race. Most of the punchlines are too good to spoil here, but even the lesser jokes are enhanced thanks to Colbert’s manic glee as Caesar.

However, the true highlight of Colbert’s “Hungry for Power Games” segment came when a special guest arrived to help him honor “the fallen.” It’s a terrific cameo, one that makes the nine minute-plus video a must-watch.