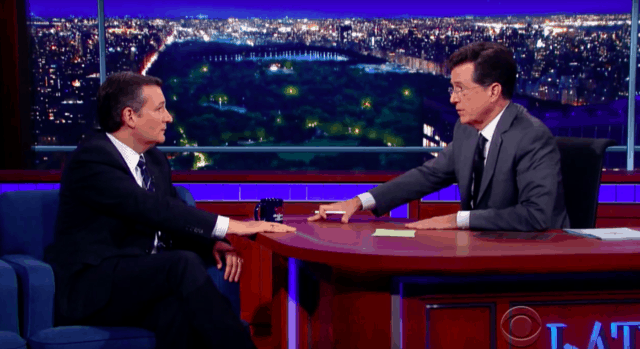 It feels like decades ago but remember there was a time when people thought that Ted Cruz might be the Republican nominee in the 2016 election?Â  But then something called “Donald Trump
rolled in and pretty much destroyed every chance any candidate would have.Â Â  I bring this up because despite there not being any Late Show programs on over the weekend, we still got a nice quote out of it’s host Stephen Colbert before an appearance he made.Â  Turns out there was a very specific reason that Ted Cruz appeared on the Late Show.

“I don’t want to betray my guest because there’s what happens on-camera and off-camera, but I guess it’s okay because I don’t think [Ted Cruz] understood what he was asking,” Colbert said on Saturday at New York Mag’s Vulture Festival, according to the New York Post. Colbert continued: “I said, ‘Thanks for coming on, I like to have republicans on,’ and he goes, ‘Well, I was hoping we could humanize me.’”

According to the Post, Colbert told the crowd, “Step 1, don’t ask anyone to humanize you. That’s something humans don’t ask.”