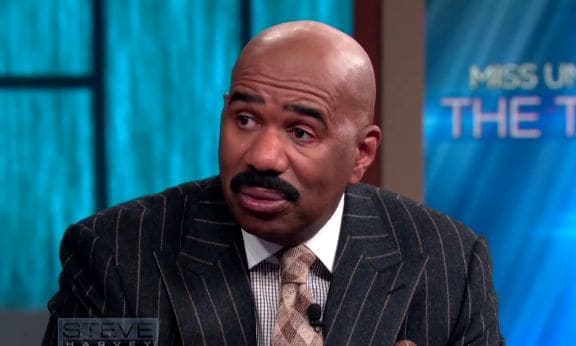 We’ve just learned that Steve Harvey has done an interview on his show with Miss Colombia.Â  Harvey seemed truly emotional as he cried when offering his sincerest apology.Â Â  Just a few days ago we reported that Ariadna Gutierrez would consider going on his show and today that day came.Â  Gutierrez also did a segment for “Today” as well as Telemundo.Â  By the way these are all NBC owned properties.

TMZ source say that Harvey told Ariadna he’s apologized to everyone, but a face-to-face with her was the most meaningful.Â  Harvey also had the real winner of the Miss Universe pageant, Miss Philippines on the show.Â  However, she never appeared on the same stage as Ariadna.Â  Come on daytime TV!Â  Didn’t we want to see THOSE fireworks?Â  It should have been in some kind of Jerry Springer format.

But I digress.Â  Right after Steve’s show, filmed in Chicago, Natalie Morales from “Today,” interviewed Ariadna, followed by an anchor from Telemundo.Â  We hear that today, Ariadna is shooting a cover for People Espanol.

One source said, “Ariadna thought having the crown taken away was the worst day of her life. She now realizes it was the best day,” adding, ‘She’s making a fortune!”

Why does that not surprise me?Â  She should have known that the second Harvey screwed up that she’d be cashing in big time.