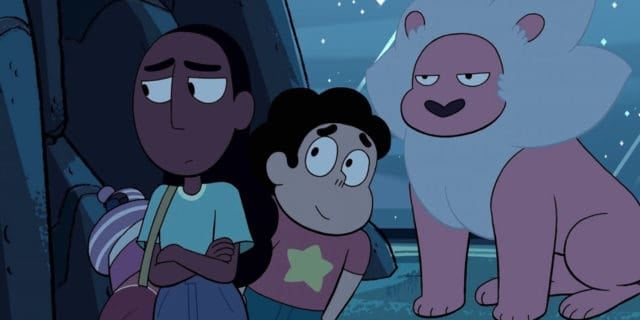 After nearlyÂ seven months of hiatus, a record for the series,Â Steven Universe is back. Six new episodes were released on the Cartoon Network app this weekend, and I fervently binge watched them, taking notes like a huge nerd. But, I accept my nerdiness, as well as my intense love of this wonderful children’s cartoon. Thus, those obsessive notes were turned into an analysis of this long-awaited “StevenBomb.” 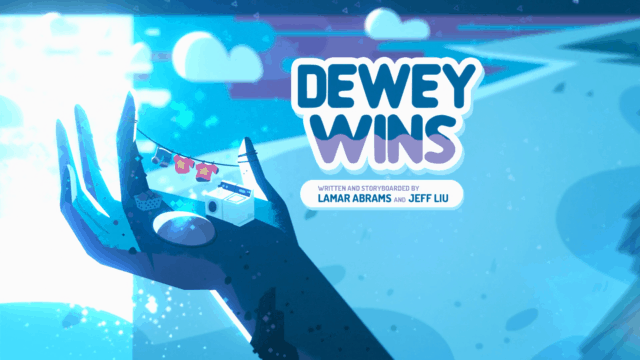 Kicking it off we have “Dewey Wins,” which picks up immediately after the ending of “Lars’ Head.” This is, to say the least, aÂ jarring start, obviously due to there having been seven months between this episode and the last. That said, being the hugeÂ Steven fan that I am, the events of the previous episode were still rather fresh in my mind.

But, for those who don’t remember what happened prior, here’s a quick recap: After giving himself up to the Homeworld Gems, Steven and Lars were stranded on the alien world. Lars died and Steven resurrected him with his powers, giving him the power to warp to Lion’s mane through Lars’ hair.

Got all that? Cool.

After reuniting with everyone, Steven leaves to take home Connie, who is acting a bit off. Steven is just a bit too excited to recount his adventures on Homeworld to Connie. Too excited, that is, to recount all the “fun” things that happened after Steven, in Connie’s eyes, gave up. Connie tries to, unsuccessfully, communicate that Steven threw away all their training and preparation by sacrificing himself to save the others. Connie leaves when she realizes her message isn’t getting through, the last time the two talk for a few episodes.

The next day at The Big Donut, a very tired Sadie is freaking out over the news of Lars, that he chose to stay in space so Steven could return home. Sadie, assured that he is safe, calms down a bit. However, she and Sadie must tell Lars’ parents, something neither of them are looking forward to. Sadie closes the shop and the two head to Lars’ home.

However, they are stopped in their tracks by a commotion in the town,Â Nanefua Pizza is campaigning for Mayor against Dewey. She blame Dewey for all the things that have happened in the town, and that he’s done little to fix it. As adorable as Nanefua is, she has a valid point, and the town is turning on Dewey.

Steven feels guilty that Gem stuff is being pinned on the mayor, something he texts to an unresponsive Connie, so he puts it upon himself to help Dewey win the election. Steven tries to explain everything that happened to the town, but Lars’ abduction has everyone in a panic. The only way for Dewey to remain mayor is to give a winning speech. Steven offers to help do just that, even if it takes all night… which it does.

The next morning, the sleep deprived pair’s work is proven all for nothing.Â Nanefua rallies the citizens to collectively take responsibility for the city, and Dewey withdraws from the race. But, this upsets Steven, why would Dewey throw away all that hard work by giving in… And then it hits him, that’s exactly what he did to Connie.

Upon this realization, Steven tries to contact Connie, but to no avail. A wedge has been driven between them, and things look grim for their friendship. The parallel that helps Steven realize what he’s done is a bit obvious, but it doesn’t make the episode any less enjoyable. This episode works well as a return, “breaking the ice,” so to speak, of the long hiatus as well as the tension from events prior. But, as with most episodes, there is well-executed drama hiding under the surface. A lesson is learned, but perhaps a little too late. 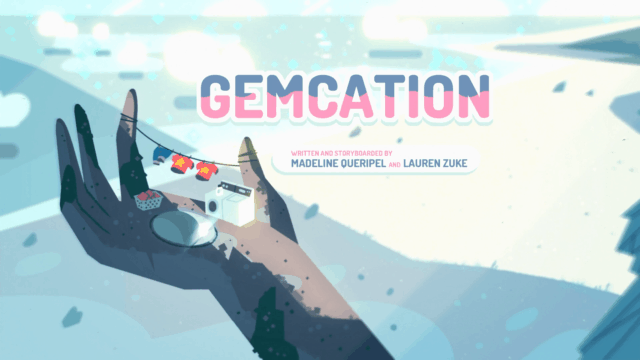 A few days have passed in “Gemcation,” and Connie has not replied to any of Steven’s texts. Steven has been on edge, looking at his phone and hoping for a notification, which he gets… from Renaldo, texting him about his “Princess Koala” DVD’s. And, oh man folks, this gag is genuinely one of the best parts of the episode. Renaldo’s character has always represented all us obsessive nerds out there and the complexity of his dumb anime texts resonated with me more than I’d have liked.

But, enough about the writers clearly calling me out on my weeabo-ways, on to the meat of the episode.

After seeing how stressed Steven is, Greg, with the help of the Crystal Gems and a poorly rehearsed script, more or less convince Steven to got on a little vacation. Thus, off to a ranch they’ve rented for the weekend. What occurs on this mini-vacation is a wonderful combination of lighthearted gags and uncanny relatability.

Greg is genuinely trying to help Steven, but he thinks his glum state is the result of something Gem related that he may not understand. Thus, at every turn, he sets up Amethyst, Garnet and Pearl to give Steven some kind of pep talk. Unfortunately, the Gems areÂ also pretty clueless as to what’s happening in Steven’s life. During Pearl’s time with him, she starts to break down,Â almost revealing someÂ deep lore secrets that fans would kill to know.

But, Steven stops her, breaking down himself by letting forth all the feelings he’s been keeping bottled up. He thinks Connie hates him, that they’ll never see each other again. Tears start to fall and he runs away. But, it’s not the Gems that comfort him. No, this is a normal human relationship problem, and Greg steps in to dad it up. But, before the sage dad advice comes forth, Greg points something out.

There is no service at the ranch.

In a panic, the gang goes on the hunt for full bars, finally finding service at the top of a hill. A message comes through and it’s… wait for it, Renaldo, once again spouting off otaku nonsense. My heart dropped, it’s a devastating, if not hilarious, bait and switch. But what we get out of it is the kind of powerful lesson thatÂ Steven Universe is known for.

Steven learns to give things time. It’s going to hurt now, but things are going to get better, be it through the time itself or because he’s giving Connie, and himself, the necessary space. This moment, and the setting it builds for later episodes, is relatable not only because of the commonality we can all find in Steven’s situation, but also because we’ve all had to continue on like things are normal, pain looming close while we have to move on and hope for the best.

Steven Universe as a series is a master at building drama and “Gemcation” is one of its high points, where the lesson and emotional core is cleverly and entertainingly disguised under a some genuinely fun moments. 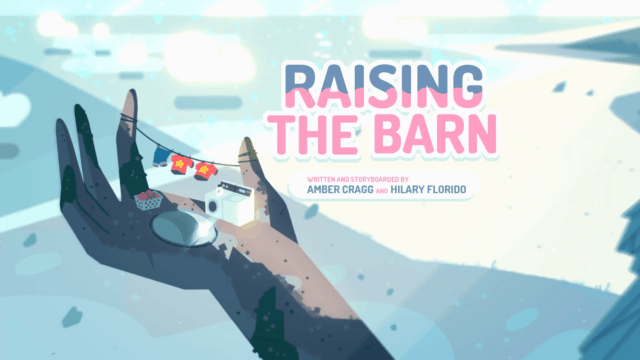 Boy, things got intense there, didn’t they? I sure hope the next episode is a light romp to cleanse the pallet from the emotional ending of the previous. Wait. Nope, “Raising The Barn,” is even more of an emotional roller coaster. Fantastic. Alright, get ready folks.

We start off with a beginning somewhat similar to “Gemcation,” albeit less active. Meaning, Steven isÂ waiting from a response from Connie rather than bombarding her with texts. But, it is not an anxious or an impatient longing, more of a exasperated one. Basically, Steven knows he must give things time, but it still hurts.

So, Steven finds himself on the beach with his ukulele. But, before he can get out a heartfelt song, Peridot and Lapis call him from the barn. It’s the first time they’ve talked to him since he got back from space, contacting them having slipped his mind with all of the post-space-adventure drama. Steven recounts his adventures in space, including going on trial in front of and escaping from Yellow and Blue Diamond.

Lapis freaks out, frantically telling Peridot they have to leave Earth before suddenly hanging up on Steven. Well, that’s not good. Steven rushes over to the barn where he finds Peridot trying to calm Lapis, trying to reason with her. Steven doesn’t want them to leave, but he understands if they need to go to feel safe. However, it couldn’t be more obvious that Peridot doesn’t want to leave Earth, but she’s not being honest about it.

Just when it looks like Lapis and Peridot are going to leave for good, Peridot notices Pumpkin (a dog-like pumpkin brought to life by Steven’s powers… why am I explaining this, if you’re reading this you probably know already!) is missing. TheyÂ definitely can’t leave without her, so the search begins. Lapis takes to the sky while Peridot and Steven search on the ground.

As Steven and Peridot search for Pumpkin, Peridot says she and Steven can still stay in contact through her tablet, only to learn that there’s no Wi-Fi in space. Still, Peridot makes it out like she wants to leave. But it seems more like she’s trying toÂ convinceÂ herself that she wants to leave, admitting she definitely wants to keep Lapis happy, but what about her own happiness?

The two eventually find Pumpkin, hiding from Lapis, like she doesn’t want to leave. Lapis is happy that Pumpkin is safe and sound, and prepares to leave once more. But, Peridot speaks up. She says Pumpkin doesn’t want to leave, and neither does she. In one of her strongest character moments, Peridot explains that she wants to fight for the life she and Lapis built on Earth, not burn it down, run away, and start over.

Hoping that Lapis will do the same, that she’ll defend their home, Peridot is devastatingly disappointed. Lapis doesn’t want to get thrown into the middle of war, the cause of most of her pain. In anger, Lapis takes the whole barn and heads into space.

Later, Steven is setting up a bed for Peridot in his bathroom, familiar territory for her. Peridot is devastated that Lapis left, even more so by the fact that she left her behind so easily. But here’s the brilliant part of this episode, it exposes why the friendship between the two couldn’t work, or rather, what realistic emotional wedge would come between them.

Lapis is a victim of war, someone who’s life was turned around by the Gem warÂ and its aftermath. She is cautious, and rightfully so, ready to bug out when the signs of war are glaring down at her. Peridot on the other hand, has not seen the same side of war, and has, more likely than not, contributed to it. But, she’s changed, she sees the beauty in life and hopes to protect it.

They’ve both been changed by their past. Lapis has become cautious, which is why she left. But, Peridot became, in a word, optimistic. This newfound outlook is what makes the events of the next episode so tragic, and, as usual, so so real.

(Check out the next half of this StevenBomb analysisÂ here!) 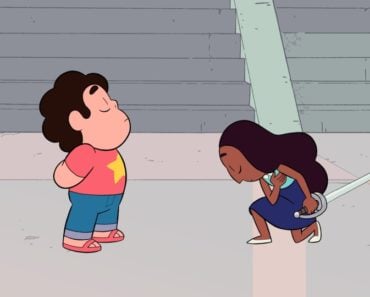 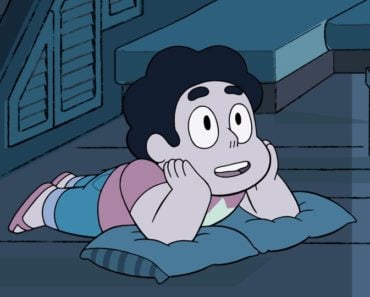 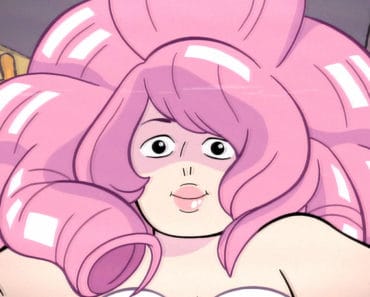 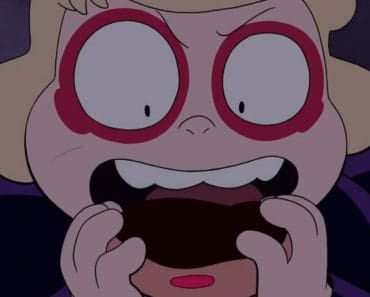 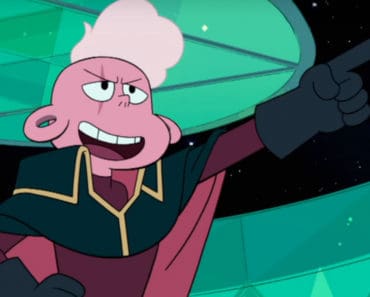 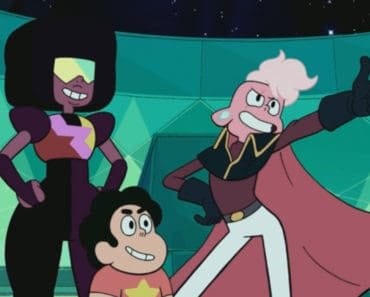