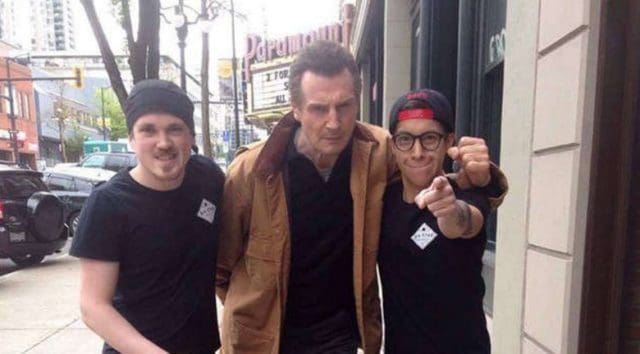 What’s your first reaction when someone threatens you with a weapon? Some people will back away with their hands raised, others will grab for the weapon. Then there’s people like Liam Neeson that will straight up slug you for the nerve of drawing a weapon on them. It’s true, digging around in the man’s past managed to unearth a lot of things, like the fact that he used to live with Helen Mirren in the 80’s, or that he started boxing at age 9, or even that he worked at a Guinness Brewery (awesome). The fact is that the man’s had a nice long life and the one time he made a mistake was the time that he lost his job because of how he reacted. During his time as a schoolteacher Neeson actually punched a 15-year old student.

Now you might be rolling your eyes and shaking your head while getting ready to vilify Mr. Neeson, but read on before you do. The kid, a big kid by Neeson’s standards, had pulled a knife on him when Neeson decided to tell him to stop disrupting the class and sit down. It’s not an unreasonable request from a teacher to be told to sit down. After all once you enter that classroom you’re on their time and need to do what they say, or leave. The kid thought of a third option without giving a second thought and found out that Neeson is just as tough as he looks. If the guy’s been boxing since age nine and keeps himself in shape you can be reasonably sure that he’ll be able to give you a beatdown if he feels the need.

This was the first time Neeson admits that he had to use his fists to solve a situation, other than being in the ring. Of course if anyone pulls a knife on another person then that’s grounds for something other than a reprimand, at least on the streets. You’re supposed to get someone else involved in any case, right? Call the cops, call another teacher, call SOMEONE because you shouldn’t be taking this person on yourself, and a teacher shouldn’t be allowed to defend themselves when a student pulls a weapon (if this was audio you’d hear the sarcasm dripping out of my voice). Heaven forbid we not teach the kids that think they can challenge a teacher any time they want a lesson.

I can understand the reasoning behind the fact that he was fired, but he shouldn’t have been penalized for defending himself.