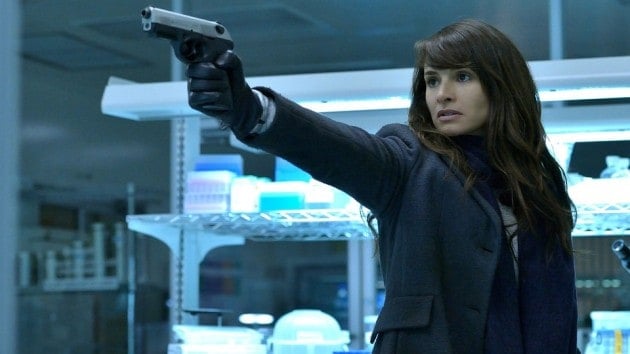 Opening with a Guillermo del Toro-directed Strigoi origin story,Â The StrainÂ kicks off its second season on about the highest note it possibly could. Turns out The Master was a frail man who suffered from gigantism and wandered into the woods at the worst possible time – a story visualizedÂ with a hilarious level of medieval panache, and some thoroughly ludicrous elements. The Master was crippled, so he gave money to the children! His brother wanted to ‘heal’ him! There’s an Ancient just hanging out in the woods for some reason!

It’s all wonderfully over-the-top, and delivered with the kind of passion I expect from Toro’s work; it may often make no sense, but the man’s ability to take us along for a ride is second to none, throwing logic to the wind while creating the most visually enveloping, unsettling sequence of images possible. Jusef Sardu’s origin story is exactly that, right down to the neck sac on the Ancient’s neck, and the ridiculous amount of worms that come spraying out of his face after he inexplicably chooses the fragile giant to become the Master, the seventh of seven ancients with the power to unite or destroy their shared brain.

NowÂ that’sÂ how you kick off a second season; whenÂ The StrainÂ drops its pretensions of being a “human” story and goes balls to the wall crazy, it can really come to life. Unfortunately, that opening sequence is an anomaly of the show’s 14-episode history; as soon asÂ The StrainÂ gets back into the human-infested world of the present, “BK, NY” begins to fall into the same rhythms of last season. There’s the annoying, super-loud sound effects of ice clinking around in Eph’s drink (in case you didn’t notice him pouring alcohol in every single scene he’s in), some new actor playing Zach and being a total jerk as usual (complaining about warm soda… where’s a Strigoi when you need him?), and about thirty shots of Setrakian grumpily staring off into the distance; it doesn’t take long forÂ The StrainÂ to get back to business, the first few scenes following the typical pattern of Season 1 episodes.

As “BK, NY” continues, however, the overwhelming amount of exposition and allusion overwhelms any kind of character work, reducing the season premiere to a series of winking conversations between characters, trying to pull them into what is to come by sketching out the details around “the next phase” of “The Master’s elaborate plan,” and The Ephigy’s (as I’m calling the ‘good guys’ onÂ The Strain; I’m trying out something new) own plans to bring down the whole stinking thing. And in all honesty, this might be a good thing: humanizing either people or vampires is notÂ The Strain‘s strong suit, as we can see whenever Gus opens his mouth and talks about “O.G.’s” or whenever Eph gets that “worried father” look in his eyes around his jerk son.

Instead, “BK, NY” is focused on bringing depth to the silly mythology of its Strigoi; and if that’s where this season is headed, things could be looking up for the show. The Children of the Night give Kelly a sense of purpose she’s never had on the series, plus the single coolest image of the entire episode. Setrakian’s failing memory also provides some much-needed humor, an injecting of personality thatÂ The StrainÂ so incredibly lacks with the rest of its lily white, cardboard cutouts for characters. While I hesitate to call it ‘good’ television – there’s so many things that don’t make sense, like Palmer’s continued allegiance to The Master, or why a blind woman would just openly walk her entire bus of blind children out into the strange night – it certainlyÂ movesÂ in a way episodes never did last season, without such concern for the meddling emotions of its idiot humans.

If that’s the identity The StrainÂ wants to take in its second season, I’ll accept the horribly written speeches about “elaborate visions” and Eph’s self-righteous quest to “save the human race” (the way he says that to Dutch, don’t you just want to punch him in the face?), if it continues to ramp up the ridiculous story of The Anti-Semitic Vampires and their merry band of sensory-enhanced children assassins (don’t forget the Ancients, who are supposed to be helpful, but still participate in unnecessarily gruesome murders on the regular), I’ll be on board. Surprisingly, “BK, NY” has brought me back into The Strain‘s wormy fold, at least on a temporary basis. Let the hunt for the Occido Lumen begin!