Home
Movies
Suggestions on How The Twister Reboot Can Actually Work 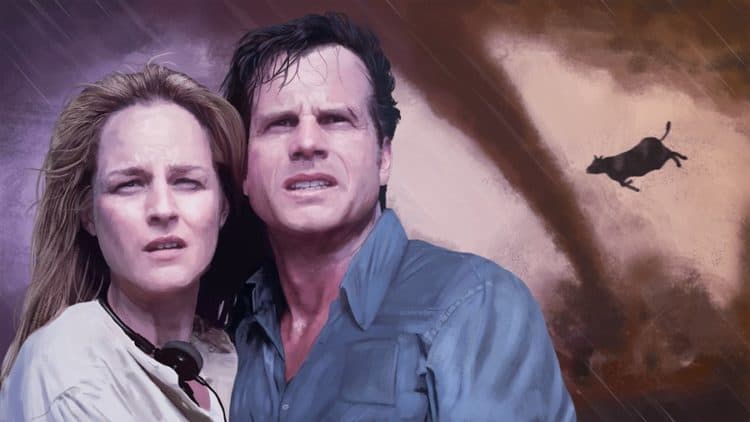 In a big way Twister was successful and it had a lot of people believing in the destructive nature of storms and how a tornado could lift pretty much anything if it had enough force to it. But the downside of this is that it also took a lot of liberties to make itself entertaining and give the audience a good show at the expense of being realistic, since quite a few of the things that happened in the movie wouldn’t be even close to possible. On that note, one obvious suggestion would be to put more realism into the reboot and think less about the humor or the snappy one-liners, and definitely make it known just what happens when one gets too close to a tornado that carries the designation of an F5, or as they call it in the movie, the ‘Hand of God’. Meteorologists have been putting in their two cents on this movie for a while now and even Honest Trailers and CinemaSins have done their bit to let people know the reality of twisters and just how strong and how dangerous they really are. The only problem here is that the movie did manage to generate a lot of interest, but not always in the best way. It’s true that movies are mostly for entertainment and don’t always have a lot of hard, factual data that can be said to be the definitive truth, but in this day and age a lot of people are wanting a little more fact and a little less fiction when it comes to certain movies, especially in 2020 when people are wondering what else is going to be coming around the corner in terms of a natural disaster.

A continuation might actually be a better idea than a reboot largely because two of the movie’s original stars have passed away. Bill Paxton and Phillip Seymour Hoffman were noted characters in the movie and would be hard if not impossible to replace, so the idea of creating an entirely remade movie or possibly offering up a sequel might actually be better since without the two just mentioned things would have to be written in a manner that would completely redo the story and possibly create a very different narrative. A lot of people still love this movie the way it is and would be likely to protest another one being made to try and bring back the same magic that made it so popular, but the fact is that making another one that could stand on its own two feet would be kind of difficult given that a continuation might be able to trek down a path that’s already been created. Trying to recreate something that people enjoyed is pretty difficult after all, just ask the people that worked on the Ghostbusters reboot in 2016. Hopefully that would be enough of a deterrent to try and make something a bit more unique or something that held closer to the original movie in an effort to insure that the fans are actually willing to come back.

The reality is that fans still love disaster movies, but nowadays with the current technology and information on just about everything being available on Google it’s likely that a lot of people are going to walk into a disaster movie thinking that they’re already an expert on meteorology and storm systems and will start calling out errors the moment they see them. This is where the need for realism comes in since people are going to want to see as much of it as they can get, especially considering that disaster movies have definitely stepped up their game throughout the years. Back in its day Twister was great because it allowed people to suspend belief and simply go with it, which is pretty standard when watching a movie, but these days people want more and they want to be entertained as well as informed with certain movies. Granted, suspending reality for the sake of a movie is great since it’s nice to think that certain things could happen given the right situation and conditions, but a lot of the things that happened in Twister kind of defy belief, kind of like the two lead actors surviving the passage through a massive tornado and not being bludgeoned to death or ripped to pieces as it passes over them. That kind of stuff was great since it made for good cinema and still does in a big way, but getting people to believe such a thing could happen isn’t too hard, though it’s a little irresponsible since there are people out there that would believe such things.

All in all though if a Twister reboot is coming then hopefully those behind it will come up with a script that’s believable and rooted a little more in scientific fact instead of cinematic fiction.