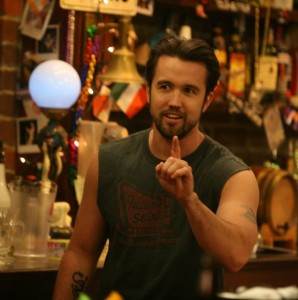 My iPod adapter is broken, so I’m stuck with whatever CDs happen to be in my car or the radio. I’ve been listening to the same CD on repeat forever because the radio is just unbearable. Though most of the music is awful, what really makes radio infuriating are the on-air personalities. This vibe was recreated perfectly by Dennis, Dee and Frank tonight on Sunny.

Tonight, Mac won the opportunity to make a shot from center ice at a Flyers game had Charlie train him. Meanwhile, Dennis, Dee and Frank began podcasting which eventually broke down into arguing and silly sound effects.

Tonight also marked the return of Cricket, complete with a nasty trash can scar, Ben the soldier, who is still rocking his jean shorts, and the waitress, somehow believing Dennis would actually give her an apology.

Glenn Howerton (Dennis) absolutely killed it as Dennis. I could definitely see him on a real radio station. He even nailed the stammer that so many DJs have as they try to find more pretentious faux-knowledge to fart out.

David Hornsby (Cricket) seems to have some sort of inhuman ability to keep a straight face as he recounted the time a dog almost took some liberties with the infected hole in his neck. The outtakes from that scene would be worth picking up the season six DVD alone.

Though it was the “main” plot in the episode, the Mac and Charlie half seemed to take a back seat to the podcasting misadventures. This doesn’t mean it was without its memorable moments including Mac’s overuse of the word “jabronie” and Charlie’s “bowl of cream” analogy for shooting a puck.

Season six has yet to live up to the amazing first three, but tonight’s episode has definitely set it on the right path.