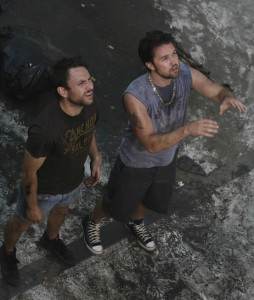 Getting stuck in an abandoned pool is extremely low class.

Tonight’s episode explored the subject of the gang’s class, or lack thereof. After the gang are denied entry to an exclusive country club pool, Mac and Charlie decide to reopen a diving pool that has been abandoned ever since their childhood friend Jaime Nelson drowned in it. As they try to find a way out of a very deep hole, Dennis, Dee and Frank spend an afternoon at the very crowded public pool.

The reason the gang feel the need to take a dip is to beat the heatwave in Philadelphia. This was incredibly relevant to me because it’s the middle of October and my town is still seeing temperatures in the 90s. It also brought back memories of taking swimming lessons as a youngster. It wasn’t nearly a gross as the public pool on tonight’s Sunny, but I definitely got a cool blast of nostalgia.

Attempts to hide Kaitlin Olson’s pregnancy seemed a little too “sitcomy” to me. It was either a beach towel or a giant handbag and I would much rather have just seen that she was pregnant. If anything, have the episode tackling Dee’s pregnancy (which will be airing in two weeks) happen earlier in the season. This could’ve been a tongue-in-cheek way of hinting at the pregnancy, but it didn’t work too well if it was.

Despite the number of complaints I’ve heard about this season so far (seriously?), you have to admit how remarkable it is that Sunny took a network with very little original programming and started a trend of fantastic shows like The League, Archer, Damages, Sons of Anarchy, Rescue Me and Louie.

Sunny has hit its stride and is as out there as ever.