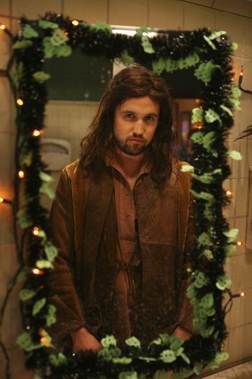 Finally, a Halloween-themed episode of Sunny. I’m not sure why it’s taken the gang six years to show us what their take is on All Hallow’s Eve, but that’s not the point. The point is that there’s a Halloween episode of Sunny in existence.

As the men in the gang plan a Night at the Museum-esque sleepover, Dee reveals that she’s pregnant. She explains that one of them is the father and that the deed was done at a recent Paddy’s Halloween party. The men “mash” their hazy memories together to figure out the guilty party.

The bulk of the episode was flashbacks from not only the men of the gang, but Artemis and the McPoyle brothers. It was fantastic to see everyone’s opinion of themselves acted out. They are all even more extreme versions of the cartoon characters that inhabit the Sunny universe. The absolute best part of the flashbacks was Dee’s slow transition from a winged angel into an ostrich. It was the ultimate “Dee looks like a giant bird” joke. The problem, though, is that the joke will never be quite as funny after that home run.

The costumes were brilliant, too. Frank was ManSpider (not to be confused with Spiderman), Charlie was the Phantom of the Opera but thought he was a vampire, Dennis was a strange combination Luigi from Mario Bros. and sex offender and Mac was “that dude from Lord of the Rings. ‘Viggio Morgenstein.'”

I’m confident that “Who Got Dee Pregnant?” will go down in Sunny history as one of the best episodes of the series. It had it all: running gags taken to the absolute extreme, Artemis and Frank’s grotesque love affair, the McPoyles, ocular pat-downs and Charlie’s drunken sobbing.

It’ll be hard to top tonight’s grand slam/touchdown/other sports analogy but if the rest of the season is only half as good as tonight’s episode, Sunny fans are in for a real treat.