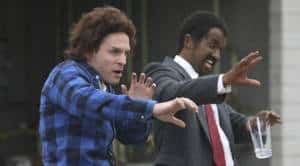 The gang’s self-produced Lethal Weapon 5 may end up being the callback joke to end all callback jokes. Originally referenced in passing at the beginning of this season, the film stars Dennis as Riggs and Mac making the very regrettable decision to don blackface as Murtaugh.

After Dr. Meyers broke his hip, Dee finds herself substituting in his drama class. In an attempt to present herself as cool, she invites the class to Paddy’s to view Lethal Weapon 5. Prior to the screening, Dennis, Mac and Frank discuss the rights and wrongs of blackface. Meanwhile, Charlie takes a young Insane Clown Posse fan as his protege.

Dave Foley returned as Principal McIntyre and was, once again, scene-stealingly hilarious. He remained very calm when dealing with Dee and Charlie when most would lose their patience. He was almost reminiscent of Jason Bateman’s calm straight man from Arrested Development.

As for the film, I felt like the high production values and focus on the project weren’t characteristic of the gang. Normally, they would begin production only to argue with each other and treat it like a competition. The only things like that that happened was the switching of roles with Mac and Dennis and Frank’s refusal to get a green screen for Mac and Dennis’ shots. Perhaps the men of the gang have turned a new leaf? We already see them united in making jokes about Dee’s pregnancy.

Another great callback from this episode was a joke that referenced an episode from season one. Dee asks the kids to keep the fact she took them to the bar a secret. One girl says that she’s been in a bar before, and a boy says, “I’ve been in this bar before.”

Sunny has gone from a relatively simple “punk rock” sitcom to something more complex, with more callback jokes and more subtle hints and nudges and winks. The show had hit it’s stride in season three, but it has finally started to mature. This maturity isn’t has bad as I had once feared.