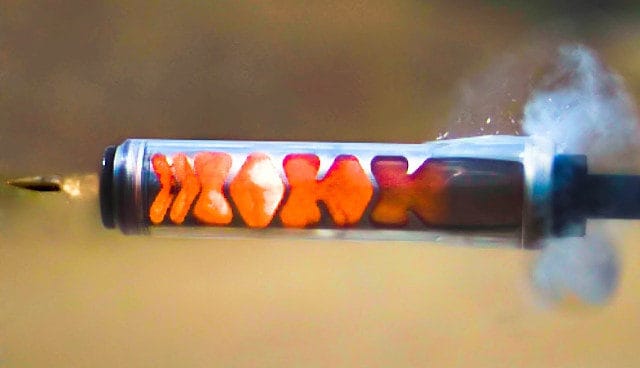 You really don’t know what’s going on inside a gun’s suppressor until you see it in slow motion, and with a see-through suppressor. Soteria, a suppressor designer and gun supplier, was good enough to team up with Dustin and figure out just what it looks like when a bullet is fired through a see-through suppressor. The results are pretty cool even for those who aren’t gun enthusiasts, since it also gives you a good idea of what’s happening when a gun fire. Most people would think that you squeeze the trigger and a round is pumped through the muzzle in the direction of the target, and they’d be right. What’s going on at the muzzle however is something very cool that most people wouldn’t give a lot of thought about unless they saw it with their own eyes.

To start with, a lot of suppressors are not able to make the noise of gunshot go away completely as they do in the movies and on TV. The average suppressor will dampen the sound but not make it sound like a whisper. Suppressors have a number of positive qualities, the most obvious being that they muffle the gunshot and save your ears from any undue noise. The sound of a gunshot can damage a person’s hearing and the recoil from a rifle or a handgun can be equally harmful if a person isn’t ready. Suppressors can dampen the noise and save a person’s hearing and can even dampen the harsh recoil from a firearm and save a person’s shoulder from the undue force that comes as a result of the shot.

In the clip you can see as different suppressors are used how the different designs and engineered chambers can collect the gases that are emitted when the gun fires and release them once the bullet has left the chamber. A couple of the suppressors didn’t work so well, as the first that pops off during the shot was using very fine threads that couldn’t withstand the pressure that built up. The second one that failed was a glass suppressor that also couldn’t take the pressure and just fragmented.

The see-through suppressors give a nice look of what’s happening inside but aren’t entirely practical since a few of them are still undergoing design modifications to make sure that they will work. The suppressors that do work however are very impressive since they manage to trap the gasses and dampen the noise while also having a profound effect upon the recoil.

As I’m not a fan of guns this isn’t really my field but even I can state that it’s fairly interesting to watch. The engineering aspect of it is amazing really and the minds that think up this stuff are something I’m a little bit envious of in some regards. Still, I can’t help but note that the further south a person goes in the US the more likely a person is to find gun enthusiasts no matter where you turn. It’s an oddity to be sure but definitely something that a person is smart to embrace or forego comment on when they’re in that part of the US.