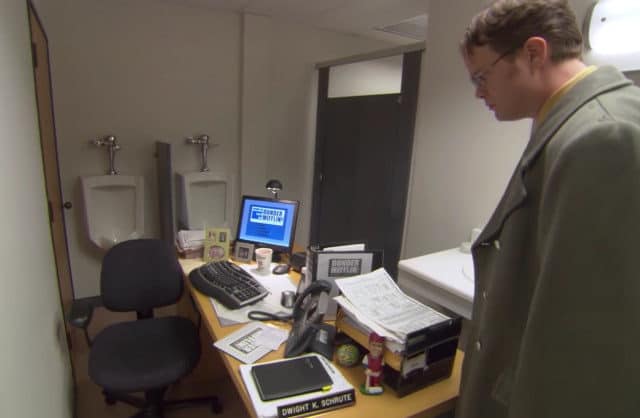 Let’s face it, we’ve all had this kind of person that we’ve worked with. Jim’s pranks on Dwight are bordering on just being mean but don’t go quite over the edge. It’s enough to drive Dwight crazy though. It guess it all depend on how you feel about the characters and which ones were your favorites when it comes to whether you think they’re funny or not. Come on though, most of what Jim pulled was pretty funny.

The workplace, be it an office or anywhere, can be absolutely grueling at times and mind-numbing at others. Sometimes it takes a little levity to get things going and to be quite honest I think that a lot of us have tried doing these types of things in the past just to get a laugh or to get a rise out of those we work with. Â The office pranks that are essentially harmless but time consuming are usually those that upper management might frown upon but don’t generally punish too harshly unless they happen to truly offend the person they’re used against.

Dwight obviously is not the most well-balanced individual though he does have his uses. One of them is to be Jim’s target since he seems so prone to being fooled or losing his temper. You would almost think that he’d cease being a fun target since it’s so obvious that Jim knows how to get him riled. That kind of person however usually seems to bring it upon themselves at times since the superior act is kind of tiring and a little overdone. If you’ve ever worked with someone like Dwight then you might have been tempted to pull a few pranks as well.

The desk in the men’s room however is one that you could only get away with on TV or in the movies, since in real life it would be a pretty severe punishment for the ones that did it. The other pranks would be just as prone to real life as that and would still be funny but wouldn’t be as tolerated. The Office is however the perfect show that allows this kind of behavior because, quite honestly, it’s just too tempting to target a man that acts like Dwight does. Yet somehow he was one of the favorite characters of the show.

Kudos to the actors though for pulling off some of the absolute best pranks in the history of television and kudos of course to Rainn Wilson for going through with so many. I kind of wonder how many takes they had to do for this show to get them all right. Personally I think I would have been laughing at nearly every prank Jim pulled, especially with the wrapping paper and the Asian actor friend that stood in for Jim in one episode.

Pulling pranks on someone you work with has its perks. You get to have a little fun and so long as no one gets hurt you can lighten up the workplace a bit.