Home
Supergirl
Supergirl Season 1 Episode 13 Review: ”For The Girl Who Has Everything” 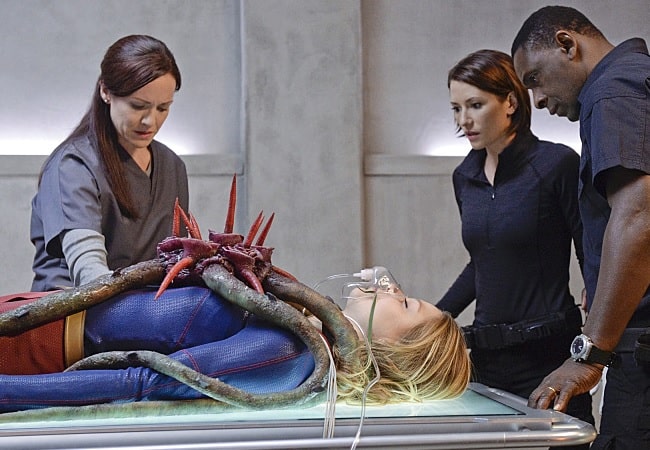 After being possessed by the Black Mercy last week, this week’s Supergirl picks up right where we left off as Kara has to fight a parasitic alien that mentally traps her in a dream world.

While I am more familiar with Starro as opposed to the Black Mercy, it seems that they almost have similar powers so seeing this episode took me back to seeing Starro in the DC animated shows as a kid. I’m always a sucker for “What If” and “Dream” stories and this episode was no exception. Mostly because we got to see so much more of Supergirl’s visual take on Krypton which definitely has some similarities to Krypton in Man of Steel. I expected Kara to have given in right at the start of the episode, but it was the other way around. I liked that she knew from the get-go that it was a hallucination, until she got persuaded to think that it was all real and stared forgetting her life on Earth.

Chyler Leigh has been a strong force since the start of the show, but in this episode she completely stole the whole show and gave one of her most powerful performances so far. Even though J’onn/Hank is the one in charge at the D.E.O., I always love when Alex takes in charge of any situation and who better to lead the operation to save Supergirl, than her family? It was emotionally powerful to see the scene where Alex gave a speech about pain being part of life, to get Kara to remember. While Alex may not have powers, that moment proved once again that Kara isn’t the only supergirl on this show as Alex is one too.

After Alex saves Kara from the dream world, the episode took several turns for both the good and bad. As Kara learns that Non was the one who send the Black Mercy on her, she goes after him and unleashes all of her anger in one of the better fights of the show. I couldn’t help, but squeal when seeing J’onn in full Martin form and with a better look at his whole costume that (thankfully) includes a cape. But it’s the moment when Alex kills Astra, where I got heavily mixed feelings about this episode, mostly because of the decision that she and J’onn made to let Kara think that he killed her aunt. While I found J’onn’s reason for doing so very sweet, we have seen how Kara deals with lies and the longer Alex keeps it to herself, the worse Kara’s reaction is going to be when she learns the truth.

I wouldn’t be surprised if this episode was written during a time when the writers didn’t know if they were getting a full season order or non. In many ways, this felt likeÂ a season finale, hence why Astra was killed off whose death would then setup Non to be the new big bad which he now is serving as. Regardless, I’m not sure how to feel about Alex killing Kara’s remaining family – technically she does have Superman, but stillÂ – and it might take me a few episodes till I get to a point where I know how I feel. I’m just not looking forward to the unnecessary drama that will follow simply because Alex didn’t tell Kara the truth.

Overall, “For the Girl Who Has Everything” started very strong, had a solid middle point while the ending has me iffy. But as a whole, this episode was one of the stronger ones of the season and had a lot of great emotional moments that I will keep going back to watch over and over.

Kara has a mental battle with the parasitic alien Black Mercy and it’s up to Alex to save her in this week’s solid episode of Supergirl.