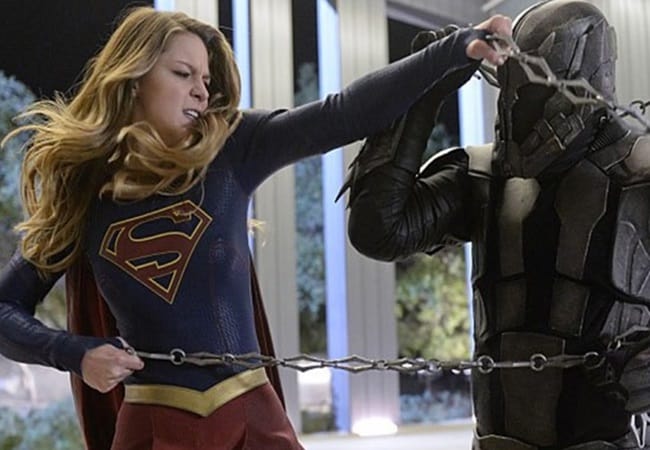 After another one-week break, Supergirl finally returned tonight as Kara goes up against the DC baddie, Master Jailer while also dealing with several other obstacles in this week’s episode.

Master Jailer, while an obscure DC Comics character to me, was one of the better villains of the week that the show has had so far. His motives and actions in the episode definitely depicted him as one of Supergirl’s darker villains she has faced. With the great Lexi Alexander behind the camera for this episode, we got some incredibly strong action scenes, especially in their first encounter with the chains. As someone who always enjoys Superman comic covers when he breaks chains that he’s been trapped in, it was neat to see another Super character getting to do that too, as a little nod.

We saw Kara having multiple problems to deal with both as Kara Zor-El and Kara Danvers which made this one of her most challenging weeks. We get introduced to Italia Ricci as CatCo’s newest recruit, Siobhan Smythe (a.k.a. Silver Banshee, a comic book destiny that she’ll be seeing soon) whose name I can’t pronounce nor spell without looking it up. Seeing Siobhan’s rivalry with Kara was a lot of fun, mostly because this was a case where Kara couldn’t rely on her powers to deal with it and seeing how it drove her crazy, was a highlight. The scene when Siobhan is messing with Kara by messaging her tight questions about her and James’s relationship, floored me. It’ll be neat to see how she goes from where she is now to becoming this monstrous villain in a few episodes.

Can we all agree that this back and forth between James and Lucy is getting a little tiresome? The one part I didn’t really follow when Lucy was investigating Maxwell’s disappearance and how her father helped her find out that the D.E.O. was behind it. Last I checked, weren’t those two on bad terms and if so, would someone as hard-headed as him, be so easy in doing her any favors? Minor nitpick, I know, it just seemed odd, but point is that James and her have had at least three arguments now since they got back together and it’s getting old. However what were more interesting was the disagreements between him and Kara in this episode because of Lucy’s issue with James being so close to Supergirl, like he was with Superman.

There is this big discussion about the morals of keeping someone like Maxwell under the D.E.O. that really got me thinking a lot because of what James said to Kara. While Maxwell is pure evil and a dangerous player that deserves punishment, Kara need to think about this, if it were to come out to the public, how it will affect the world’s view on her. It’s safe for the world that he is kept away from the world because of the danger he can cause, but at the same time, he is a human who deserves to go through the criminal justice system. It’s one thing to keep aliens down there or meta-humans in the pipeline over on The Flash, but straight up human beings?

Maybe not so much and luckily at the end, she lets him go, but not without getting a warning from Alex that if he exposes Kara’s secret, the D.E.O. will do the same to him. The side-plot at the end with James asking for Kara’s permission to tell Lucy that she is Supergirl, was a little out of character in my view because would he ever do that to Clark? Probably not, but I’ll wait and see how future episodes deals with this plot point, unless Lucy decides to break up with him before he gets a chance to, with or without Kara’s permission.

The final conflict in this episode is, as expected, Kara’s angry feelings towards J’onn as she is under the belief that he killed Astra. Her reaction is completely natural, but what isn’t natural is how unnecessary this was to begin with. Had Alex just been allowed to tell her from the beginning, I really think that she would be more understanding than J’onn is willing to give her credit for. Instead, there is this, still natural, uncertainty in Kara as she doesn’t know any more if she can trust and work with him. With six episodes left of the season, it’s bound to be revealed to Kara that Alex killed Astra sooner or later and, unless Kara is more understanding than ever, it won’t be pleasant at all. But I suppose that any great show need its fair share of dramatic storytelling, both good and bad so I’ll wait and see how this plays out.

“Truth, Justice and the American Way” was an incredibly powerful episode with the great action scenes, emotionally charged moments and great stories overall, aside from some of the hick-ups. The episode’s ending continued to set up this big mysterious threat that is Myriad which AI-Alura react strongly to by not being able to answer anything about it. Either it’s the DC Comics character that they are teasing (even though they aren’t referring it as a person) or it’s something completely else. Either way, the episode was a big growth for the show as a whole by exploring a more mature tone. Also, the more Lexi Alexander episodes we can get, the better!

In this week’s powerful episode of Supergirl, Kara has to fight a dangerous new villain who executes prisoners from Fort Rozz, the Master Jailer.