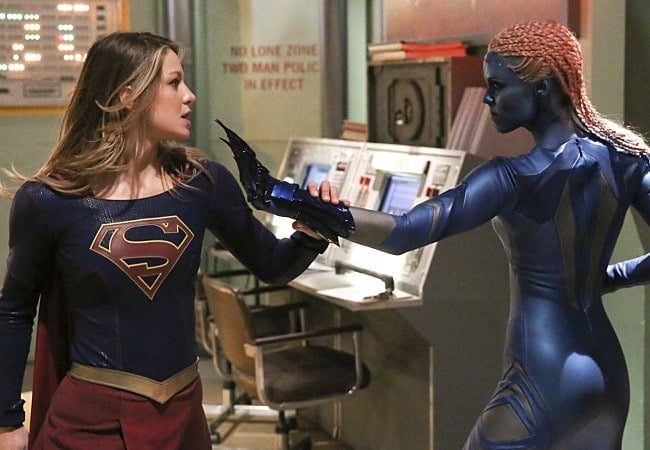 This week’s episode ofÂ SupergirlÂ was not only a big one for fans of the CBS series, but also fans of CW’sÂ Smallville, as we get to see the former Girl of Steel, Laura Vandervoort make her return to the DC Universe, as the DC baddie Indigo.

As someone who is a huge fan ofÂ Smallville, I couldn’t help get both excited and emotional over seeing TV’s first Supergirl on the same screen as our new Girl of Steel. Vandervoort did at one point inÂ SmallvilleÂ play a Brainiac who was disguised as Kara so it was definitely fun to see her getting to play an evil character that was also connected to Brainiac. I like the connection that Indigo is what got Kara’s pod and Fort Rozz to Earth all those years ago. Even though it wasn’t a big mystery that I always wanted answers to, I didn’t mind seeing it all connect. Just like Livewire and Bizarro, Indigo was another terrific female villain for this week’s episode.

It made me appreciate once again the hard work that the writers and respective actors put into theseÂ strong female antagonists and have them be just as compelling as some of our female heroes. While Indigo is destroyed at the end of the episode, we learn that Non is bringing her back which didn’t surprise me as it was already revealed that Vandervoort would be recurring on the show. Even though Indigo is known for having gone from good to bad in the comics, maybeÂ SupergirlÂ will do the reverse and turn this version from bad to good. I would definitely not mind seeing Benoist and Vandervoort side by side on a regular basis. It would be cool for Supergirl to have not just some more female friends, but alien ones too.

“Solitude” also focused a lot on the struggling James and Lucy relationship that was really close to get to a good resolution as Kara gave him the permission to tell Lucy that Kara is Supergirl. Unfortunately, because this is television, James was just a little too late as Lucy decides to end it between them. While the relationship focus on this show is nowhere near as problematic and annoying as it is onÂ Arrow:Â I do hope thatÂ SupergirlÂ can start to ease down on the romance focus as a whole. Maybe that was why we saw these two break up as maybe an indicator that we’ll be seeing less of that for the rest of the season as we only have 4 episodes left of Season 1. Speaking of relationship focus: how about that kiss between Winn and Siobhan?

With an episode title like “Solitude”, we got to see Superman’s Fortress of Solitude that had a lot of the classic elements to it, like the giant House of El key and with the crystal design. There is one major take away from that scene that may tie-in withÂ The FlashÂ crossover, which was the glimpse of the Legion ring and that exact shot was one of the things we saw when Barry traveled to Earth-2. Is this what will be one of the connections for these two shows when they crossover? We just have to wait till Monday, March 28 when Grant Gustin’s Barry Allen runs over toÂ Supergirl. Despite of that fun Easter Egg, we didn’t spend enough time in the Fortress for me to have much thought about it, but at least we now know that Kara can use it as a resource from time to time.

Last, but not least, we get a fantastic conclusion to this episode as Alex finally tells Kara the truth that she did kill Astra, in aÂ heartbreaking performance by Chyler Leigh. Most would say that Kara should have been perhaps a little upset with Alex, but I’m glad that she wasn’t. Kara did the right thing in just embracing that her sister was put in an impossible situation and gave her a powerful hug while also re-connecting with J’onn in what was a beautiful final shot.

Overall, “Solitude” is one of my favorite episodes and one that I’ll go back to many times because everything worked so well. Despite the relationship drama with James and Lucy, everything came all together nicely in all the perfect ways ever. The best way to sum up this episode in few words: CBS where is that Season 2 renewal?

Smallville’s Laura Vandervoort returns to the world of the Girl of Steel as Kara’s latest baddie, Indigo, in this week’s Supergirl.