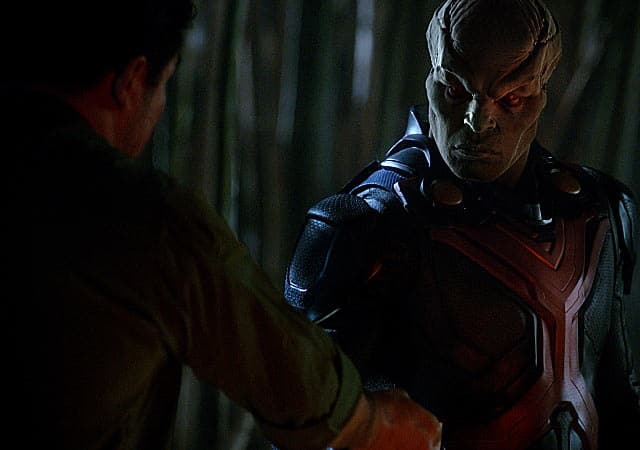 After revealing himself as an alien, this week’s Supergirl deals directly with J’onn J’onzz being interrogated by the military as we finally learn what happened the day when the real Hank Henshaw came for J’onn.

David Harewood has been one of the show’s strongest players and this week’s episode was another great example of why and also why he is perfect for this character. The backstory was, as expected, heartbreaking as we see how cruel and awful the real Hank was as a person. While the flashbacks of how J’onn became Hank wasn’t as long as I expected, we got more history on how he became the director and how he got to meet Alex which was beautifully done.

This was genuinely one of my all-time favorite flashback episodes of any show that I’m watching right now. We also see more of the two Danvers sisters history too which is always welcome because of how important and special the relationship is in the show. It’s almost hard to pick which flashbacks was my favorite, but my top 3 are definitely J’onn’s story, how Alex got recruited and Kara’s job interview with Cat. Something that would be welcomed is a huge flashback episode for Jimmy at some point, as well as for Cat.

“Manhunter” also had a couple of neat DC Comics Easter Eggs, including the debut of James Harper and the introduction of Project Cadmus. In the comics, Harper is Roy Harper’s uncle and also the superhero Guardian who he could become later on if they bring him back. The bigger mystery is Project Cadmus which in the comics is what created Superboy who I bet will either be introduced on the show sooner or later. While I knew for sure that Jeremiah would be somehow alive, I didn’t expect it to be through Cadmus as J’onn learns that information as he is erasing Harper’s memories of the night.

I’m willing to bet that Hank is also still alive and that Cadmus will have turned him into Cyborg-Superman (minus the Super name). Another highlight of “Manhunter” was Lucy and Supergirl (who reveals her true identity to her at last) finally starting to find common ground with one another. While they have to keep it on the downlow for now while they also look for Jeremiah, I do hope that they are back in some capacity for next week’s episode due to a certain speedster showing up. But as she is now the director of the D.E.O., hopefully Lucy will get to bond with Kara more because I really like idea of these two as allies.

However, we did have a little drama going on too at CatCo as Siobhan is 100% set on revenge-mode for what Red-K Kara did to her in last week’s episode. Unfortunately, she fails miserably after she tries to pretend to be Kara by sending Cat a nasty email that is quickly exposed by Winn and Cat. The entire time I kept thinking where and how they would possibly be able to set her up as Silver Banshee before the episode was over. But as she gets wasted on the top of a rooftop and almost falls down to her death, she unleashes the Banshee scream which saves her and thus a new mystery begins. While still excited for her transformation, I’m just insanely curious to how she will go from looking human into what she will look like in next week’s episode as we have seen official photos already for that.

The one thing that I was a little letdown by was how briefly they touched on Kara’s new struggle with having to win back the city’s trust and respect as it was quickly mentioned at the start and then right at the end. But we still have 3 more episodes before the season is over so there will be time to explore on that important subject. Other than that, “Manhunter” was a strong episode as a follow-up to “Falling”. While it was just for a brief second: I may have cried happy tears when I finally saw J’onn eat his favorite snacks from the comics, Chocos.

Don’t miss next week’s big episode of Supergirl titled “Worlds Finest” which will be the big crossover with CW’s The Flash on Monday, March 28, 8/7c on CBS.

The story of how J’onn J’onzz became Hank Henshaw is revealed in this week’s stellar episode of Supergirl.