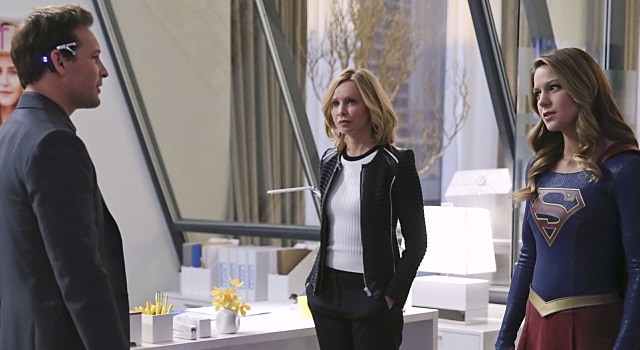 While there have been way too many random breaks during the first season of Supergirl, the show finally returned this week as Supergirl faces her biggest challenge so far as Non and Indigo brainwashed the citizens of National City.

Something that is also introduced in this episode, besides the Myriad weapon, is the DC Comics character Maxima, a villain who I have wanted to see on the show since the start. While I wasn’t familiar with Eve Torres Gracie before this, from the little I have read of Maxima in the comics, along with my knowledge from Superman: The Animated Series, she was a good fit for this character. Not just on a physical level, but also presence wise, unlike how Smallville did their take on the character. While it was short, seeing her as a recurring villain in Season 2 would be really dope as another great addition to the female villains the show has introduced.

As this is the penultimate episode before the season finale next week, I wasn’t sure how much we would get in, essentially, Part 1 of this story. But Non and Indigo managed to pull some major moves that put our hero into several difficult positions. The only thing that I felt was forced, while also well explained, was that Superman shows up, but ends up being mind-controlled as well. I know that one of the issues this show has to deal with is Superman’s “presence” since he can only be part of the show in a small degree, but not really. It made sense why he was trying to help her this time, but it also felt like the silliest tease to then see him right away fall under Non’s control. Either let him be used to some points or don’t bother brining him in because honestly, how many times can we keep just seeing a CGI-figure pop up?

I was actually at one point a little freaked out seeing James and Winn being under Non’s control and speak to Kara the way they did. It got freakier when Non made them and a female co-worker all jump from the roof of CatCo and while the boys were saved, sadly the co-worker wasn’t. I don’t know what it is, but it’s heartbreaking whenever Superman or Supergirl has to witness the death of someone that they couldn’t save. It also just makes Non that easier to hate which I guess is good for the type of character that he is as we get into the finale next week. Speaking of people that are easy to hate; I was shocked to find myself actually…enjoying Maxwell Lord for the first time in a while. I guess when he actually helped out, while throwing wit, he became slightly more tolerable.

While all of that is happening, we get an update with J’onn and Alex as they continue to be on the down low and ends up back at the Danvers’ house where we meet Eliza again. It occurred to me in that moment that we had only seen Helen Slater on this show maybe 2-3 times this season as a total, where as I thought she had been on more. Her reaction to learning about Martian Manhunter and having all the Martian questions that she had is the funniest geek-out-moment that I have seen from a character in a good while. It was good that we had some bright moments in there as this was definitely one of the darker episodes of the season which is fitting as we head towards the end.

Even though I really loved Indigo’s first episode, Vandervoort was better used here as she really go to take her villain to the next level. As someone that still thinks of her as TV’s first Supergirl, it is really a blast to see her having ton of fun with this baddie, which makes me hope that while Non probably will die next week in some way, that Indigo lives on for the next season. Is it weird that I still hope she switches sides at some point? They could always do what they did with Brainiac on Smallville in the Legion episode as he had been “corrupted” by a computer virus, if I remember it right. Indigo’s act in this episode and what she did to Alex, got us all setup for what will be an intense finale next week.

Not only is she under mind-control, Alex is now also all geared up with Kryptonite, which only made me think of Metallo funny enough, Â and is now forcing Supergirl to fight her own sister. There is no way that Alex will die in one way or another…right? Hopefully she won’t because she is just as important and needed for this show as Kara is. Overall, very solid episode that sets up the finale very well as it will be intriguing to see how Kara and her friends figure this situation out.

Don’t miss the season one finale of Supergirl titled “Better Angels” next Monday, at 8/7c on CBS!

Non and Indigo brainwashes National City as the Myriad weapon is activated in this week’s episode of Supergirl.