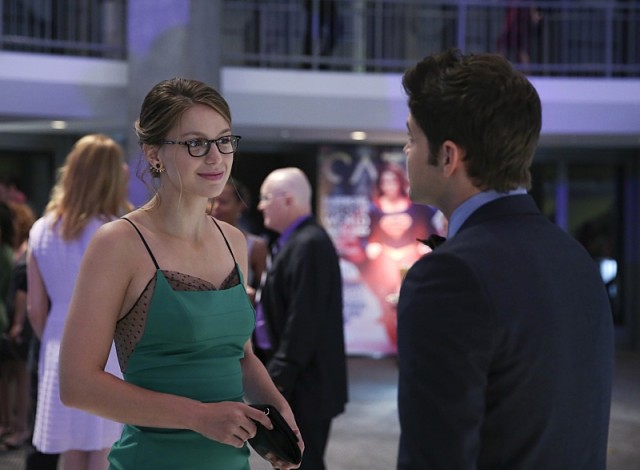 This week’s episode of Supergirl featured Kara Zor-El not only having to deal with one of Superman’s baddies, but also the question and struggle of how to separate herself from simply being labeled as the Man of Steel’s cousin.

The villain of this week was Reactron, a new DC character for this particular reviewer, and based on the little I had seen/read of him, I loved how SupergirlÂ brought him to life in terms of his costume and power-set. While we get this interesting and quite frankly tragic backstory for Reactron, it wasn’t his actions or even his fight scenes with Supergirl that made this episode so good. It was the deeper theme of Kara’s goal to be able to defeat him without having to have her cousin swing by, and “Fight or Flight” ended up being more like a great commentary on why Kara Zor-El is so much more than just “Superman’s cousin.”

For many years in DC Comics, Supergirl has always had to struggleÂ as a working character, where despite having many runs of her own comics, she is generalized as just the cousin and not seen past beyond it.Â That’s what I’m in love with Supergirl already as a show: itsÂ greatest quest is to show people why they should see Kara as more than just a family member of Clark’s. As much as I love Superman, as a comic book reader, I’ve never found it fair how Supergirl has been viewed by the general comic community, so seeing Kara on this show this week talk to Cat about how great this hero can be instead of being seen as just a consolation price was incredibly inspiring; it’s almost like she was talking to the people who will make those types of remarks about SupergirlÂ as a show. While it was neat to see Superman show up for a brief second to save Kara from her one fight with Reactron, I was glad that she was frustrated about the situation; it’s important that she can be on her own and not have Jimmy just use that dope Super-watch to call Supes whenever he needs him.

Speaking of everyone’s favorite photographer, this episode was a great one for him too, because we learned so much aboutÂ his life in Metropolis and how he also feels that he needs to stop being dependent on Superman so much. In many ways, Kara may not be the only character on the show that is trying to get away from being in the Man of Steel’s shadows; SupergirlÂ may have awesome special effects, cool action sequences, and interesting baddies, but one of the things that has me wanting to watch this every week now is seeing Kara succeeding in distancing herself from her cousin so that she can be her own hero with her own wins and losses–that’s the really compelling story. However, I will admit that I teared up during her instant messaging with Clark, who in this universe uses emojis. How awesome is that?!

While SupergirlÂ does need to work a little bit on the action sequences, “Fight or Flight” continued to illustrate the series’ constant improvements. It also placed some great seeds for next week’s episode, where we will see more of Lucy Lane, who got introduced at the end of this week’s episode. I’m going to have to warm up to Maxwell Lord, because right now I just love to hate the guy, which I think is supposed to be the point. And what the Hank is going on with Director Henshaw?