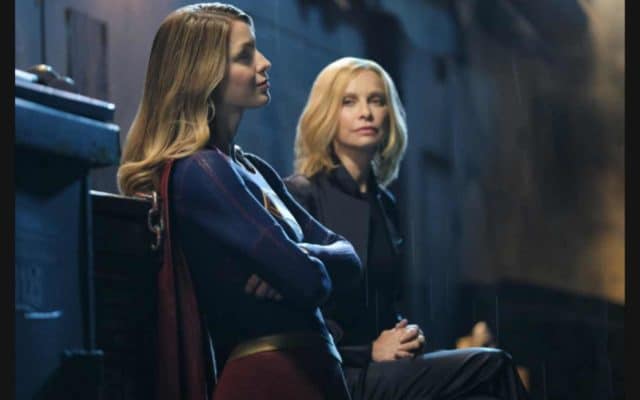 Supergirl has always been a show that has nailed it’s female characters, delivering a great cast dominated by a bunch of tough and strong females. While the second season has only introduced more of these with Maggie and Lyra, it’s been missing one ofÂ Supergirl’s most important characters; Cat Grant. There has been a nice job of filling that void from a story perspective by giving Kara an increased friendship with Lena, but the show can never replace the enjoyable wit that Cat brings to the table. Yet, even though Cat Grant no longer appears on a weekly basis, “Resist,” does not stop her for returning in an epic fashion.

“Resist,” really kicks things up because Rhea is fully attacking the city now. There is complete chaos and while Kara and her crew can do everything in their power to control these events, it’s becoming too much for her to handle alone.Â Supergirl has established a really great team dynamic in season 2, but it also has given everyone an important role to play, which can sometimes leave Kara without an outlet or an outside perspective to aid in the show’s story. Last night, the return of Cat Grant filled in the missing piece and brought back one of the greatest relationships onÂ Supergirl, which helped to ground Kara in a desperate time of need.

One of the relationships thatÂ Supergirl lacks is the one between Kara and her Earth mother. Although Kara and Alex’s mother is not a necessary component to the show, there are definitely times where these characters need a mature parental figure to help guide them or aid in decisions.Â Supergirl nails the sister dynamic and bond that Kara and Alex share, but sometimes the characters need the advice or love from their parents to work through certain situations. Cat has always filled that role for Kara and build up a great on screen relationship with her in times of need. “Resist,” puts Kara’s back up against the wall, so it’s really nice to watch as Cat steps in and steps up to help Supergirl and everyone else to save the day.

Season 2 Â has put a large focus onto different mother-daughter relationships though, which was the focal point of “Resist.” Last nightÂ was a huge display of how far mother’s will go to protect their children from many different viewpoints. Cat steps up to be a distraction in order to help out Supergirl and the greater good, which is not something she would do for anyone. Yes, Cat likes to be the center of attention and would do anything to build her ego and credibility; however, the show has built up her connection and care for Kara to make her decision very believable.

The same goes for Lillian Luthor, who recognizes as an extremely last resort, she is going to have to work with her enemy to save her daughter. While Lena and Lillian have never seen eye to eye, the last thing Lillian would let happen is aliens kill or imprison her daughter. As bad as she may be, Lillian steps up in a hectic time and puts herself behind enemy lines in order to get Lena back. While she is hoping her save the day routine can win Lena over to her side in the long-run, deep down it all comes back to a mother ensuring the protection of her daughter.

“Resist,” clearly wants to send a message that reflects on events unfolding in the real world, which is a risky thing to do. While the show nails the delivery of everything, SupergirlÂ falls back on it’s problem of pushing Cat into being a mouthpiece to convey a point instead of an actual character. While there was nice development for her in some of the more quiet scenes, most of what she does is preach, which is not necessarily a bad thing, but can quickly become too much and feel like it takes over the episode.

Supergirl always does a nice job of balancing it’s message and “Resist,” is a big display of that. The show has crafted theÂ relationships so they are the driving factor and best partÂ that the show has to offer. “Resist,” was certainly a solid Mother’s Day filled episode that highlights all of the great mother’s and how they each impact the show’s main characters. While it would have been nice to get some more scenes with Cat quieter and being more personal, it was fantastic to have her back on the show.Â She should be an important part of everything asÂ Supergirl heads into it’s finale episode of the season.

– So many super ladies in this episodes at once, well doneÂ Supergirl.

– Really really missed having Calista Flockhart on the show, she is just so awesome as Cat Grant. Her speech was well-delivered.

– Didn’t touch on it but even Rhea’s motivations, no matter how screwed up, are with Mon-El’s best interest in mind. While she fails to take into consideration what her son wants, she believes she is protecting him and doing what’s best.