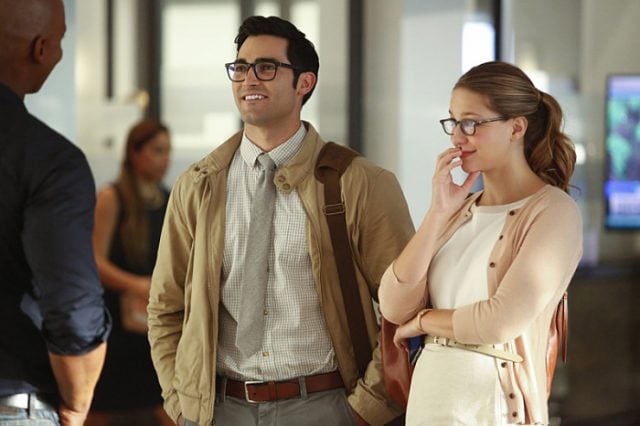 Throughout its 20-episode first season,Â SupergirlÂ never truly felt like a CBS show. The superhero series’ penchant for serialized storytelling and its comic-book roots weren’t part of the Eye Network’s typical brand, a brand that, while successful, doesn’t usually bring in the youngest or nerdiest fans.Â SupergirlÂ always seemed like a CW show that got lost in the shuffle, a fun, heartfelt, and action-packed drama that would fit in perfectly next to the smaller network’s lineup of Greg Berlanti-produced DC projects, such asÂ Arrow,Â The Flash, andÂ Legends of Tomorrow.

Fortunately, for Season 2, Supergirl was able to make the switch over to The CW, and with that network change came a lot more changes that were very much present in the show’s second season premiere. The DEO now has a brand new, glass-paneled office (with views!); Winn is the the government agency’s newest employee; and Kara is on her way to becoming a reporter. However, perhaps the most significant difference between Supergirl Season 2 and the show’s first season is that tonight’s premiere allowed us to finally meet Kara’s cousin, Clark Kent, aka Superman. No longer do viewers have to simply catch glimpses of the famous hero’s feet or watch as he and Kara secretly instant message each other; Superman (played by Teen WolfÂ alumÂ Tyler Hoechlin) is fully in frame throughout the Season 2 opener, making everyone from Alex to Winn to Cat Grant swoon as he teams up with Kara to save the day in National City.

So what do all these new changes mean for Supergirl? Does it still feel like the same show it was last season, and is the show better or worse? I’ve only seen tonight’s premiere, “The Adventures of Supergirl,” but I can say that, without a doubt, this version of Supergirl is more confident, charming, and enjoyable than the one we got on CBS. Minor differences, such as having Winn work alongside Alex and Hank at the DEO, or having Kara and Clark not only discuss their Kryptonian origins but also how difficult it is to balance both parts of their lives, make a world of difference, and they help ensure that the series feels more vibrant and cohesive. There’s a type of energy that SupergirlÂ possesses during tonight’s premiere that is showcased in almost every scene, from the super-powered family duo stopping the Venture from crashing to Cat revealing to Kara what she truly thought of her when she first interviewed to be Ms. Grant’sÂ assistant.

Perhaps the best part about tonight’s Supergirl premiere, though, is how the show was able to keep and convey its feminist message but express it through action rather than the heavy-handed speeches that plagued most of the series’ first season. Instead of having Cat, Alex, or Kara deliver a monologue about why women are so powerful and independent, Supergirl allows each of them to demonstrate their own unique form of strength in several powerful scenes. Alex not only risks her life battling the episode’s villain, John Corben, but she also helps Hank address the issues that exist between him and Superman. Furthermore, Cat doesn’t simply talk about how much she works, explaining to Kara that she only usually sleeps for two hours every night; she also has one of the episode’s very best moments when she encourages Kara to dive into the challenges that life throws her away, to jump into the unknown and just keep swimming.

And while Kara is part of not one, not two, but three excellent rescue scenes with Clark in “The Adventures of Supergirl,” her most memorable and impressive moment comes when she is honest with both herself and James, recognizing that she wants to be a reporter for CatCo and also that she wants to remain just friends with Jimmy for now. Sure, it’s always pretty awesome to watch Kara use her super-strength to stop a plane from crashing, or to see her utilize her heat vision in order to fix a collapsing building, but the times that she embraces her inner strength are even more impressive. Plus, these moments serve as inspiring and relatable experiences to the female fans that watch this show, both young and old. They might not be able to lift up as many heavy objects as Kara, but they can look to her as a true hero not only because of her super abilities but for, as Cat accurately points out, her integrity.

The only complaint I can really lodge against “The Adventures of Supergirl” is that it tries to do a little too much within one hour. From introducing new characters like Clark, Lena Luthor, and Metallo (who will definitely be back next week) to dealing with last season finale’s cliffhanger to breaking up Kara and Jimmy before they even have their first date, there’s a lot going on during this premiere, and not all of it is given the time it needs to breathe and develop.

However, that’s a minor nitpick when you’re dealing with a season opener this well-constructed, an episode that is impressive on pretty much every level, from the stunts and special effects (I’m still not over those Kara/Clark rescue scenes) to the writing and performances (especially Hoechlin as Superman). “The Adventures of Supergirl” is a pretty terrific first chapter for SupergirlÂ on The CW, and I can’t wait to see what the show has in store for us fans during the remainder of Season 2.

What did everyone else think aboutÂ Supergirl‘s Season 2 premiere? Comment below and let me know.

Superman arrives in National City and works alongside Kara in the fantastic Season 2 premiere of Supergirl.