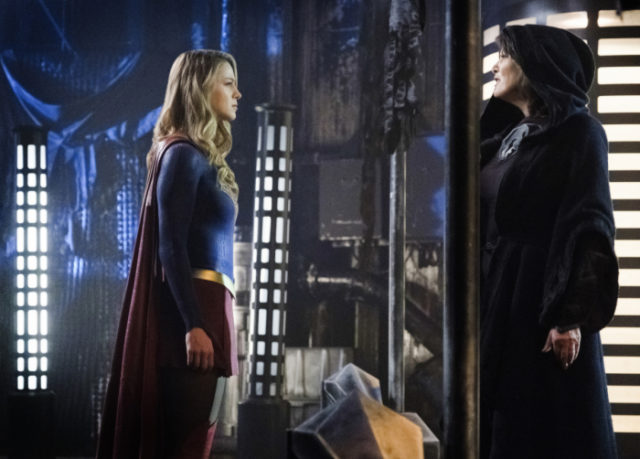 “Fort Rozz” is one of those classic TV cases where I absolutely love the concept of an episode but am disappointed with its execution. Tonight’s female-centricÂ SupergirlÂ features a women-only, outer-space mission to a Kryptonian prison, where Kara has no powers and must use and embrace her humanity in order to fight and survive. On paper, that’s right up my alley; however, “Fort Rozz” lacks much of the power and substance that I was hoping to see from this episode, probably due to the fact that I thinkÂ SupergirlÂ never actually shows enough of Livewire’s rehabilitation to earn her redemptive sacrifice near the end of the hour. Ultimately, as a story and as a moment of growth and reflection for Kara, it all feels under-cooked.

And again, that all goes back to Livewire, who, despite Brit Morgan’s committed performance, has never fully clicked with me as a character. She’s almost always angry and constantly throws out one-liners, but I’ve never found much depth in her, despite how many timesÂ SupergirlÂ has brought her back and explored her relationship with Kara. Livewire has always come off as more of a one-note villain, which is totally fine and could even potentially work in a storyline like this, especially when you also have Psi (played by the excellentÂ Yael GrobglasÂ fromÂ Jane the Virgin), who is also mostly there because she’s snarky and evil and has really awesome powers. If theÂ SupergirlÂ writers wanted to make this aÂ Suicide Squad-like story in which Kara is forced to team up with her most formidable foes for the greater good, I could have enjoyed that on a purely fun, surface level. But the creative team tries to accomplish more than that in “Fort Rozz,” and despite their best efforts, the emotional moments with Kara and Livewire never fully crystallize, which is especially a shame given how sweet and charming Kara and Mon-El’s conversation afterwards is. He recognizes that his return has not been easy for her, but he expresses that he wants to help in any way that he can and does so by reminding Kara that she changed Livewire’s heart without her powers from the yellow sun. “That was all you,” he tells her.

With how strong that Kara and Mon-El scene is, “Fort Rozz” could have benefited more from having Kara and Imra spend more time together. Despite the fact that they are the only two “heroes” on this Fort Rozz mission, the two of them barely interact throughout the hour, especially when Imra is forced to stay on the ship and communicate with the DEO while Kara and Livewire track down Jindah Kol Rozz and face off against Reign. Some moments between the two most important women in Mon-El’s life would not have simply caused more friction in the already tension-filled love triangle; they would have also given Imra the opportunity to see if Kara truly lives up to the legend she’s been billed as, while Kara could have gotten to understand the more complex reasons why Mon-El fell for Imra (other than the surface-level ones: she’s beautiful, intelligent, powerful, etc.). Adding some more layers and nuance to this stereotypical romance drama could have injected some more life into the storyline, which currently feels like it’s in wash-rinse-repeat mode, with Kara seeing Mon-El and Imra together, doing her best to deal with her conflicted emotions, and then having a deep talk with Mon-El. Here’s hoping theÂ SupergirlÂ writers do something a little different with this love triangle in the coming weeks.

Outside of the main storyline, though, there’s plenty of fun to be had in “Fort Rozz,” especially with Alex and Ruby’s storyline, which is lovely and sweet without ever becoming too cutesy. As we’ve seen throughout this season ofÂ Supergirl, Ruby is wise beyond her years and has been able to help Sam deal with some major issues, so it makes sense that she would also be able to provide Alex with some comfort when she’s confronted by her painful feelings for Maggie after receiving an text from her ex asking her to mail her left-behind passport to her. Plus, Alex using her FBI badge to scare Erica, the bully harassing Ruby, into apologizing serves as a creative and entertaining way to give an injured Alex an active role in this episode without forcing her back out into the field. It’s surprising but also incredibly satisfying that I smiled and nodded in agreement when, near the end of the episode, Ruby offers to sub for Kara anytime Alex needs a sister. A lot of credit has to go to Chyler Leigh, who brings genuine warmth to Alex’s interactions with Ruby, and also to Emma Tremblay, who has done a terrific job as Sam’s daughter since the Season 3 premiere.

And speaking of Sam, she’s finally beginning to become aware of Reign’s control over her. In one of the episode’s most powerful scenes, Psi uses her powers on Reign and causes her to see a vision of a screaming Ruby who remains helpless and out of reach from her. The nightmare is enough to jolt Sam awake from Reign’s spell, and Odette Annable’s simple delivery of “Where am I?” is heartbreaking. Nearly as emotional, though, is Sam’s confession to Alex that she’s losing time, admitting that something is wrong with her. In just 11 episodes,Â Supergirl and Annable haveÂ done a terrific job of making Sam into a character we empathize with and root for, despite the fact that we know there’s not much hope for her in her current situation. It’s been some of the most impressive storytelling and character work we’ve seen all season fromÂ Supergirl, and I, for one, am hoping that Annable’s Sam is able to somehow stick around after Reign is defeated at the end of this season. I doubt it’s possible, but I’ll have my fingers and toes crossed as we head closer to the Season 3 finale and the final showdown between Supergirl and Reign.

But Reign might not be the only villain that Kara will be facing off against. As the final scene of “Fort Rozz” shows us, the other World Killers are awakening, just as Jindah foretold, and it’s only a matter of time until Purity and Pestilence begin wreaking havoc in National City alongside their villainous companion. There’s no guarantee Kara will able to change any of their hearts like she did before with Livewire, but one thing’s for sure: when all three of those World Killers come together, it will be Supergirl’s toughest battle yet.

Imra, Livewire, and Psi join Kara on an outer-space mission to Fort Rozz in an uneven episode of Supergirl.