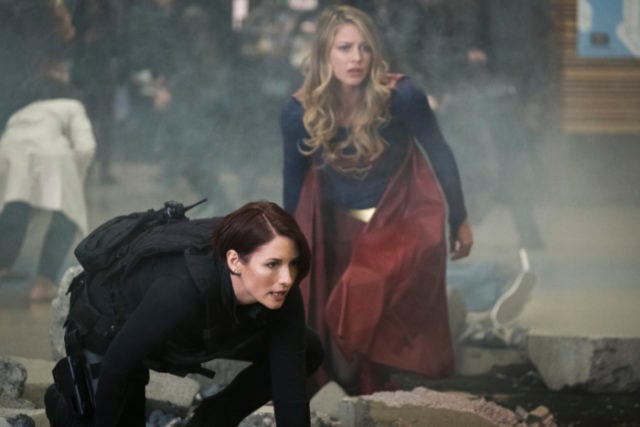 SupergirlÂ is almost always at its best when it focuses on the Danvers sisters, and fortunately, “Both Side Now” puts Kara and Alex in the forefront, examining how the two women take both similar and different approaches to handling heartache and combating evil. As Alex points out during a harsh conversation with Kara near the midway point of tonight’s episode, Supergirl’s desire to believe the best in people and connect to them on a more human, emotional level is not practical most of the time; in fact, Alex even insinuates that Kara is only able to keep this mindset because she’s bullet-proof. For Alex, the quickest, most efficient, and most effective way of dealing with enemies is to be cynical and pragmatic. In her mind, there’s no sense in looking for humanity in beings whose sole mission is to cause harm; it’s hopeless to try and help them–you can only defeat them.

I don’t fully buy into Alex’s strategy here. Just a few short weeks ago, she saw how important it was for Kara to embrace her humanity in order to defeat Reign; would she be so quick to second-guess her sister’s belief in the power of hope and love again? I doubt it. However, her stance here wonderfully reflects Kara’s emotional state from the beginning of Season 3 and provides the Danvers sisters with a clearer connection than they’ve had all season long: they’re two people trying to move on from heartbreak, and they need to believe again that they deserve and will find happiness.

Furthermore, the very visible parallels between Kara’s journey with Mon-El and Alex’s with Maggie solidify the bond between the sisters and tell a story that’s deeper than simply getting over an ex-boyfriend or ex-girlfriend. Kara and Alex’s responses to loss are all about losing faith in themselves, in the people they know they should be and are; they struggle with compromising themselves when times are difficult and another path might look easier. Ultimately, the two of them being there to support each other is about reaffirming that what’s most important in their battle against evil is to never lose sight of what they’re fighting for, what they’re protecting, and that’s humanity. And by humanity, I don’t mean simply the physical, living, breathing people that inhabit National City; I mean what they represent: hope, friendship, family, and love. The fact that Kara and Alex can recognize and relate to the pain that the other has experienced enriches the words they exchange at the end of the episode. The two of them acknowledging and empathizing with each other’s bouts with loss, fear, and hopelessness make moments like Kara telling Alex that she deserves “all the things” in life and Alex expressing how glad she is that Kara is the person that she is more authentic and powerful.

And it’s moments like that or when Alex follows Kara’s lead and reaches out to Julia instead of trying to take down Purity that help lead Kara to come to the conclusion she makes at the end of “Both Sides Now.” She realizes that maybe she and Alex and the rest of the DEO aren’t supposed to beat the world killers but save them instead. Unlike enemies Kara has faced off against in the past, such as Mon-El’s mother, there might be a way to reawaken the human souls inside these new godly beings, a way to reignite the hope, joy, and love these women knew and experienced before their bodies were co-opted as mindless mercenaries. Kara may have to look inside herself and utilize what has always been Supergirl’s greatest super power, the same power I’ve mentioned many times before: her humanity. Kara’s faith and trust in others could be the secret weapon that not only saves the world killers but saves the world.

What did everyone else think about this week’s episode ofÂ Supergirl? Do you think it was a strong way for the show to head out on hiatus, or did you want something more? Comment below and let me know.

Kara and Alex clash over how to deal with the world killers, and Mon-El is honest with Imra in a strong episode of Supergirl.