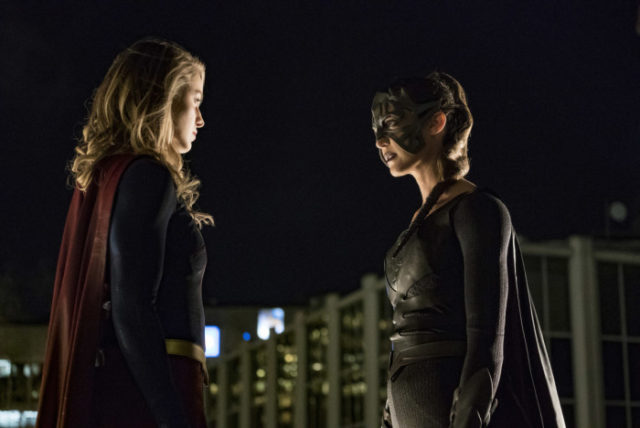 After having Kara and Alex take down evil Nazi with Oliver, Barry, and the rest of the Arrowverse’s greatest heroes in last week’s “Crisis On Earth-X” crossover event, it’s back to business as usual on tonight’sÂ Supergirl. Well, maybe it’s not quite as “usual” as we’re used to, given that “Reign” is Season 3’s mid-season finale, the last new episode ofÂ Supergirl that we will get until January 15, and it packs one hell of a punch, often times literally.

Tonight’s hour features some particularly great moments, from Lena and James finally acting on their feelings and kissing, toÂ M’yrnn’s excitement over hot chocolate, to J’onn’s obsession with “Jingle Bell Rock.” But what really makes “Reign” a special episode ofÂ SupergirlÂ is Kara’s storyline, which shows her continuing to struggle with Mon-El’s return and his marriage to Imra and concludes with an epic, bloody battle between her and Reign, who proves during this first fight that she’s probably the toughest and most dangerous foe that Kara has faced yet.

It’s not just the fight itself, though, that makes this confrontation special (although I absolutely LOVED the action sequence inside of the office Christmas party, set to “Rockin’ Around the Christmas Tree”). No, what injects so much energy and emotion into the battle between Kara and Reign is the journeys that both women have taken to get here. For Kara,Â SupergirlÂ Season 3 has been about her attempts to detach herself from humanity and her attempts to rediscover her sense of it. With all the pain and heartache that Mon-El’s return brings with it, it’s easy for Kara to slip into the colder, more militant version of herself; Alex even encourages it, telling Kara to be cold, to be Kryptonian, to be alien. Unfortunately for both of the Danvers sisters, though, Kara turning off her humanity like a switch doesn’t transform her into a better fighter or a stronger hero; in fact, it actually weakens her. As we’ve seen countless times before, including most recently the Season 3 premiere, Kara’s true strength and fortitude comes from within–it comes from her heart and the love she has for everyone in her life. Right now, it’s difficulty for Kara to feel that love, to embrace it, because not only is the man she loves married to another person but she no longer sees the love he once had for her in his eyes. One of Kara’s greatest sources of love has been Mon-El, and with that currently missing from her life, she needs to readjust and reawaken the other forms of love she feels: love for Alex as her sister, love for both of her mothers, Alura and Eliza, and love for her all of her friends like Lena, Winn, and James.

One friend Kara might not be loving for too much longer, though, is Sam, whose transformation into Reign has been dark and sad but powerful. Thanks to the timeÂ SupergirlÂ has spent with Sam and Ruby, getting us invested not only in their mother-daughter relationship but also in Sam’s friendships with Lena and Kara, we care deeply about what happens to the two of them, which is why it’s so tragic watching Sam slowly fade away into this Kryptonian “world killer,” a figure who thinks of herself not as a devil but as a dispenser of justice. “All I am is truth, judgment, and death, and I will reign,” she tells Kara during their fight, as she explains how she wants to cleanse this world of sinners and plans on being its judge, jury, and executioner. Will Ruby be considered one of those sinners? I certainly hope not, but judging by the final scene of tonight’s episode, it doesn’t look like much of Sam is left inside of Reign’s vessel. The fact that Ruby discovers her mom like this on Christmas morning, after they share their story of the “best Christmas we ever had” earlier on in the episode, makes it all the more devastating.

And despite how much Kara may want to stop Reign, she isn’t able to during their fight tonight. In fact, Kara is bloody and broken by the end of their confrontation, as Reign beats her with her fists and weapons before zapping her with heat vision and dropping her from the top of a skyscraper. Kara has been beaten down by Kryptonian threats in the past before but never this badly, and this defeat at the hands of Reign will hopefully serve as both a humbling loss for Kara (who states that no Kryptonian should be able to phsyically challenge her anymore since she’s taken down Superman) and as a wake-up call that she can’t and shouldn’t do this alone. Despite all the incredible powers that she possesses, the greatest and most powerful ability that Kara Danvers has is her humanity, her ability to love and be loved by others. It’s those people that surround her hospital bed at the end of tonight’s episode that Kara will need to turn to if she wants to defeat Reign, and hopefully, when she wakes up from this brutal defeat, she’ll not only realize that idea but put it into action.

What did everyone else think aboutÂ Supergirl‘s mid-season finale? What are your thoughts on Season 3 as a whole so far? Comment below and let me know.