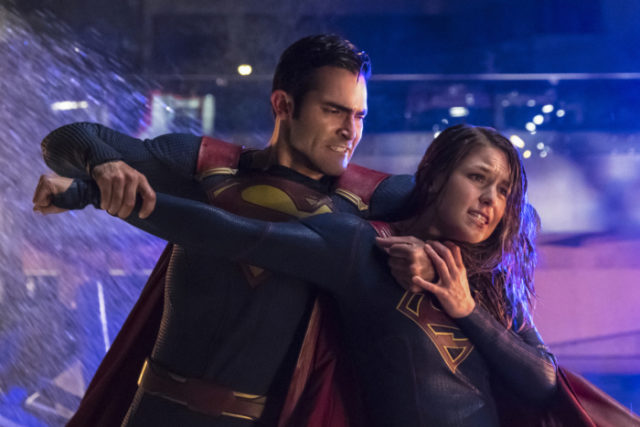 Both Mr Hoechlin and Ms Benoist praised each other. Â This morning in TV Line, Mr Hoechlin graciously said ofÂ Ms Benoist, and her sparring skills, “She works hard, and she’s had a lot of practice.” Â WhileÂ BenoistÂ remarkedÂ that she’s “flattered” by Hoechlin, “the real fighter.” So, Ms Benoist and Mr Hoechlin saw each other’s fighting skills on display extensively whilst filming the Kara vs Kal battle scenes for tonight’s Supergirl season finale, and they impressed each other. Â The two actors expressed excitement for fans to see this fight scene, though it’s just the undercard.Â “I know they’ve been teasing it as the battle of the century, and they definitely did not hold anything back,” Hoechlin told THR. “We spent a lot of time on this fight scene and then the stunt people did such a great job. I think everyone will be very pleased with how this looks. It’s going to be an epic battle. Sometimes you do a fight scene and it takes half a day, sometimes it can take the whole day. This took multiple days. I’m really excited for people to see that.”

This past Friday, Tyler Hoechlin talked about returning to his role as Kal-El/Superman on the CW’s SupergirlÂ withÂ The Hollywood ReporterÂ .Â He felt surprised to see Kara and Kal’s battle in the script.Â  MrÂ Hoechlin described how muchÂ he enjoyed opening up this week’s script and “exploring another part of him [Superman].” Â He likes breaking fresh ground for his character, “…everybody has things that make them angry …Â so to find what that was for him [Superman]Â was cool to explore as an actor.”

TV and film have explored Superman’s heroics to a much greater extent in what upsets him. Â Although, a year ago, Batman v SupermanÂ showed the fans a brooding, angst-filled Superman, they still have not seen quite as much about what might anger Superman. Â And certainly an angry Superman is fresh material for Mr Hoechlin, who portrayed the Man of Steel’s warmth and humanity in Supergirl’sÂ season two opener, last fall.

Yet, the Kal vs Kara battle is just the undercard in tonight’s Season Finale. Â The Main Event will be Supergirl vs Queen Rhea in single combat for the fate of the planet Earth. Â Plus, MsÂ Benoist reminds fans, “It wouldn’t be a Supergirl finale without a cliffhanger.” Â Make time toÂ watchÂ tonight’s Supergirl Season Finale. Â Supergirl airs at 8pm Eastern Time on CW affiliates.

What do you think? Â Are you more excited for the undercard fight or the Main Event? Â Let us know in the comments below.