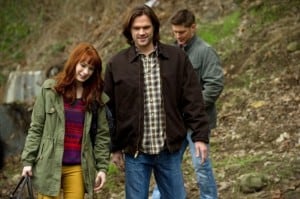 Robbie Thompson has only been with Supernatural since the seventh season, but he’s proven himself a solid writer on the show. I’ve even liked some of the unusual episodes he’s done, like “Bitten”. But he’s also developed a bit of a niche on the show as time has gone on. Just like Ben Edlund is often known as the guy with the “out there” episodes, Thompson has done well with “genre” episodes, particularly those involving Felicia Day.

In an interview with Day before her episode, she told me that Charlie is “a gift” of a role. I think Charlie is a gift to the show. Supernatural is a series that has often relied on secondary characters to flush out the small main cast. From season 1 (which introduced us to characters like John, Bobby and Meg) until now, we’ve met some memorable one-time characters who became something more, to both the Winchesters and to the audience. I think Charlie has justly earned her place in the annals of this series.

Charlie just so happened to be in Kansas this week and decided to track the boys. The trio were happily reunited (and planning to return to Moondoor for an upcoming festival – OBVIOUSLY) and Charlie got down to business: she had a case for the Winchesters. Naturally, the boys were rather surprised by her recent gung-ho attitude towards hunting given her desire to avoid these crazy situations in the past, but she’s devoted herself to research (and, obviously, she’s very good at it).

But there’s a few problems, chief among them the fact that Sam is quite ill after completely the Second Trial. The poor boy hasn’t seen a brush in days, his firing aim is off and he’s taken to wearing only one shirt (with NO buttons). Clearly the situation is DIRE!! And believe me, Dean notices and he refuses to let Sam back in the field until he can shoot straight.

So it’s a good thing Charlie is so happy to be part of the team, because she pairs up with Dean to investigate the case. Unfortunately, Sam refuses to let sleeping dogs lie and he slips in to the case when another body turns up, much to Dean’s frustration. Charlie gets a front row seat to the brotherly angst as Sam struggles to go about his daily life and Dean struggles to protect his brother. Fortunately, she knows a lot more about them now after having read Chuck’s books (apparently they’re on the internet, like all the good things are these days).

The nice thing about Charlie is that she’s far from a one-note character and no episode demonstrated this better than “Pac-Man Fever”. Thompson proved himself with the funny scenes this week, of which there were many, including, but not limited to, the clothing store “montage”, the Star Wars goodbye and the Sam punching Dean scene. But the unexpected Charlie background brought this episode to an entirely different level. It turns out that the secrecy surrounding Charlie’s past was a justifiable one. Her parents were involved in a car accident (which she believes is her fault) when she was 12 and her father passed away, but her mother lingers in a persistent vegetative state that she’ll never awaken from. Since then, Charlie’s lived her life on the fringes after getting on the authorities’ radar. Does this sound like anyone we know?

In many ways, the story of Charlie is similar to that of Sam and Dean. Even Dean draws this comparison. There’s the loss of a parent, the struggle to grow up faster than you should, and the guilt one feels over their inability to “let go” of a hopeless situation. But Felicia Day also made Charlie’s story her own with her quiet grief when Dean confronted her in the video game. Her quippy one-liners give way to a pain that is relatable and tragic, but she deals with it in her own way. Perhaps the best example of this was at the end when Dean asked if she was finally prepared to let her mother go and she agreed, but when questioned, Dean refused to let his issues “go”. And Charlie didn’t call him out on his light hypocrisy (which wasn’t really hypocrisy because of what happened after with Sam in the bunker), because, of course, Dean is the star of Supernatural and she is not. But also because I think Charlie can appreciate some of the differences in what each of them must “let go” of. Had Dean been willing to let go of things in his life before, that world saving she thanked him for might have turned out very differently. And Dean has often been far better at seeing things in others than in himself.

Some Supernatural fans were questioning the placement of what looked like such a one-off episode so close to the end of the season. Frankly, I was pleasantly surprised by how much of the mythology was dealt with in the background. Getting past Sam’s side-effects of the trials is clearly a huge issue. And I think it’s important for the fans to understand that this is escalating beyond coughing up blood or having strangely glowing arms. Whatever is happening to Sam, it looks like it could kill him before he ever gets to Trial #3. And Dean knows it too. The good news is that Dean is beyond trying to convince Sam to give up on the trials, now he’s just focused on keeping Sam out of the field unless he’s in fighting shape, which is, frankly, the best plan for everyone involved. 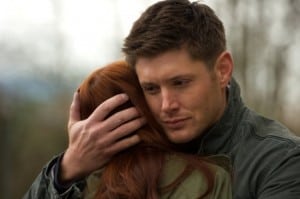 Charlie reminds us all that sitting on the sidelines isn’t something that Sam – or any Winchester, for that matter – does. She’s read Chuck’s books, so she knows that Sam will keep going no matter what. Sometimes this stubbornness has gotten him into trouble (see: season 4). Frankly, I don’t think there’s much harm in Sam sitting a case out in order to rest up. But I think Sam views that as “giving up” and they’re far too close to the end now to back down.

Dean’s admonishments for Sam to take care of himself are nothing new. Neither, frankly, is his desire to protect his brother. But talking to Charlie about letting go also seemed to lead Dean to trusting that his brother could decide when he’s had enough. Instead of insisting that Sam continue to rest, Dean suggests they find Kevin.

Carver has made a point time and again to say that he wants to show that the boys are maturing this season. To be honest, there have been several decisions that haven’t shown that and I don’t think they should be swept under the rug. But when it comes down to it – to the big decisions – I think they are. Dean was prepared to let Sam go back to Amelia at the mid-way point of the season, but Sam chose to stay with his brother. Sam is and always will be stubborn, but he’s not struggling to go on for kicks or to annoy his brother, he’s doing it because he needs to. And Dean is prepared to accept that Sam knows what he’s doing, like he did at the end of season 5. Of course, that ended with Sam going to Hell, so let’s hope the same thing doesn’t happen here.

“Pac-Man Fever” could have been a silly episode, but it wasn’t. Charlie’s return was fun, her unexpected history resulted in some terrific emotional scenes, and the brotherly moments (particularly the shoutouts to their pasts via Chuck’s books) all made it so much more. I wouldn’t say that it’s up to the sheer brilliance of “Changing Channels” but, much like that episode, we got some deeper mythology elements mixed in with our comedy and some tragedy mixed in with our quips. And Day is a gift to this show. I don’t think Charlie will ever be ridding shotgun in the Impala, but if she wants to come back a couple of times each season, I say we let her.

Next week begins the first of three mythology-heavy episodes that end with the season finale on May 15 (read some spoilers here, if you dare). Castiel returns, Kevin resurfaces and the world will finally meet the mysterious Metatron! Click here for a previewÂ or watch a sneak peek here.