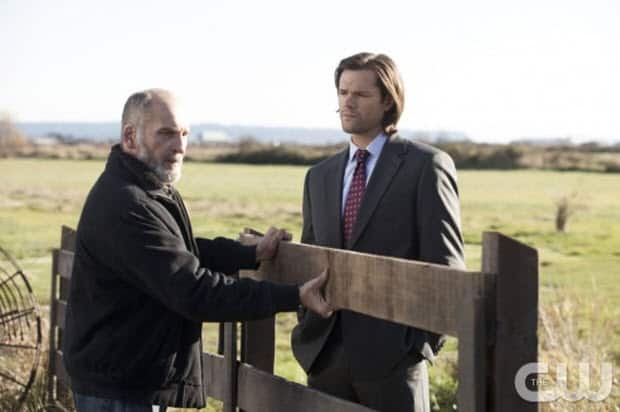 After nine seasons, a show has hit nearly every beat and explicated every point that it possibly can. Supernatural is no different. The show has hit every emotional button possible; they regularly tear apart Sam and Dean only to bring them back together for a common good, and by the end, everything is chill between the two. Season One divided them on the issue of their father; Season Five, on Sam’s release of Lucifer; Season Eight, on Sam not looking for Dean after he disappeared. And now, in Season Nine, with Dean allowing Gadreel to posses Sam and talking Sam out of shutting the gates of Hell. And they’re back together, for the common good. Again. But, (and this is a big, big BUT), Sam has had enough. He isn’t accepting Dean’s apologies or his reasoning anymore.

The two are brought together accidentally, on a case involving fan-favorite Garth (DJ Qualls). Garth had disappeared while taking care of Kevin, and is found only when hit by car and placed into a hospital. One of the highlights of the early part of the episode was Sam’s description (to the hospital nurse, when looking for Garth) of Garth as an “Ichabod Crane-looking fella”, which might be the most accurate description of anything ever.

Dean, as it turns out, has also found Garth. Dean has gone a little dark side; Garth is heavily medicated and injured pretty noticeably, but Dean wants to wake him up with adrenaline to question him about his disappearance. Sam immediately stops him because, you know, you shouldn’t inject a person with adrenaline. It’s the first of many assertive moments that Sam has in the episode; One of my main criticisms of Supernatural is that Sam is used too often as a reflecting pool for Dean’s inner turmoil, and its a disservice to both Sam and Jared Padalecki. Instead, Sam backhands Garth, which is better, I guess. Garth fakes a vomit-attack, and eventually escapes through the bathroom window. While Garth was fake-puking, Sam notices the mark of Cain; Dean, surprisingly, doesn’t lie about it, which means that he doesn’t think it important, even though it’ll presumably have some very unpleasant side-affects later on. Another layer to “Dean self-loathing” arc. Nine seasons strong!

Back to the episode. Short story: Garth is a werewolf, he’s been married to another werewolf named Bess for four months, and he is a part of a werewolf religious sect. One interesting thing to note: werewolves can be born; Bess is a second generation “lycanthrope”, as they prefer to be called. Before they find out about Garth’s furry future, Dean tries to get Sam off the case; he lies about his findings on Garth’s escape, but Sam catches him in the act. Sam basically ignores Dean’s lies. He tells him that he’ll leave once they finish this case. No angst, no sad face; just straight-forward truths. A new Sam, it seems, and one that I like.

Garth tries to convince Sam and Dean that his wife and her family (consisting of her stepmother and her father, Reverend Jim) are not the bad guys. They only eat cow hearts, and believe that man and lycanthrope can coexist. Dean is super duper suspicious, and is partially right; something is going on within the family. When the Sheriff attacks Sam and Dean, and turns out to be a part of the werewolf religious sect as well, Dean wants to waste the whole lot, but Sam convinces him to “do it right.” It turns out that Reverend Jim is innocent; he truly believes man and lycanthrope can live peacefully together. Instead, the “Maw of Fenris”, a werewolf cult, is attempting to put into action “RagnarÃ¶k,” a plan to eradicate man from the world so lycanthrope can rule. The cult is run by Joy, Bess’s stepmother and Reverend Jim’s wife.

Garth, Bess, and Sam are captured, and are nearly killed before Dean rescues them. After tender moments between Sam, Dean, and Garth (Sam and Garth have a good hug, and share a friendly smile, while Dean and Garth hug and share a conversation, as is the usual with side characters and Dean), things take a turn for the worse. Dean and Sam get into a bit of a tiff; Dean apologizes for his actions, telling him that he left because he was “messed up” and that he let Gadreel posses Sam because he couldn’t deal with his unhappiness alone. Dean wants to “put up a few W’s and put this behind” them, but Sam, surprisingly, doesn’t fall in line. His responses to all of Dean’s emoting are simple “okays”. He doesn’t trust Dean anymore, like he “feels he should be able to”. He’ll work with Dean, but being brothers he leaves as an open question. Those are his “terms”. Dean accepts, and that’s it.

The Takeaway: Dean and Sam might actually deal with the problems that they’ve had since at LEAST season four, and that’s really exciting. Of course, it’s only exciting because the show has been punting on this for the past three years, but better late than never. The biggest weakness of the show is that the writers haven’t found ways to make the emotional problems of Sam and Dean fresh. They’ve done great work on the mythology, but not the personal. Sam has been underdeveloped for a long time running, and it’s more than a little frustrating. Jared Padalecki brings it, as always, but there’s nothing new there. Sam never hasn’t had a real relationship with a side character since, like, Season One with with Sarah Blake, and she was killed last season. Sam’s problems are never in the forefront and I don’t like that.

But that doesn’t destroy the show, and that speaks to the quality of the acting and the plotting (for the most part) and the technical decisions made. This season has been a little uneven, but has had many strong episodes and only one outright bad one. Here’s to next week being ever better!