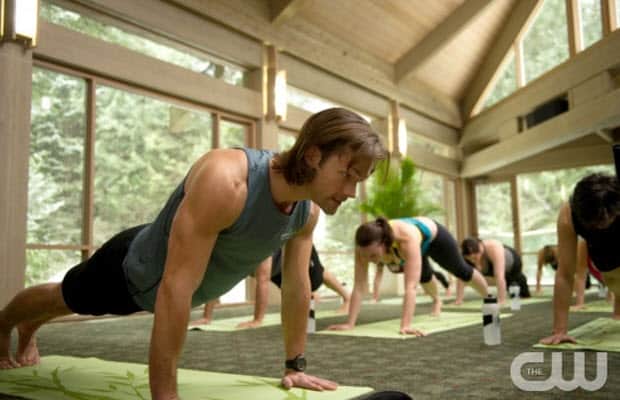 Season Nine of Supernatural has been a little strange. The first eleven or so episodes were about Dean keeping a secret from Sam, while the two brothers simultaneously tried to get a handle on the angel situation. Cas has popped in and out at random intervals. It was a wholly different, wholly serialized show that most everyone recognized playing the same notes over and over again (with varying degrees of success, of course; Season Five is so much better than Season Seven that it’s almost comical). But now? Since “Sharp Teeth”? It’s something different.

We open cold, spectating a professional hot dog eating contest (is there an amateur tour for eating? A farm league, perhaps?). A very large man named Wayne and a very skinny man named Jim are competing for the thousand dollar check. Wayne wins, but Jim accuses him of stuffing a hot dog down his pocket (Wayne’s response: “Hate to break it to you, pal; that’s no hot dog!”).Â  Wayne is then murdered; all the fat is sucked off his body and his organs are just a pulpy mess. A tiny nitpick: Wayne being a cheater wasn’t relevant to the plot at all. It seemed like to me that that little tidbit of information was to make the audience feel less sympathetic when he was sucked dry. Dude cheated at a hot dog eating contest; he didn’t bomb the UK. Feeling sympathy for him is okay.

Before they get on the case, however, there’s a nice scene that really exemplifies the difference in this show the past two episodes. Sam and Dean go at it a little bit, with Sam refusing to back off his comments even in the face of a clearly hurting Dean, who has begun drinking and staying up all not again. One cannot help but feel, though, that Dean’s actions are more about making Sam feel bad than actual pain. After this, the two brothers manage to keep it together long enough to get to Stillwater, Minnesota, where the weird fat-sucking case takes place. Not long after they arrive, another person is murdered, a woman this time. This particular person was trying to get fit for her wedding, and is attacked by whatever creature murdered poor Wayne.

Tangent: the woman went from a 180.4 pounds to 76 pounds. The police have her weight listed at 165, which Dean immediately shoots down, making some weird crack about “fat women” always lying about their weight, and soon after says the only thing this victim and Wayne have in common is “too many eclairs.” Now, call me a liberal, but this seems really douchey. The woman was attractive and relatively fit, and was obviously killing herself to get into shape and better herself. And her whole existence was boiled down to a really off-color joke. It made me angry.

ANYWAYS: Dean and Sam find that the only thing the two victims have in common is a weird suction mark on the back of Wayne’s neck and one on the woman’s back as well. This leads them to Canyon Valley, a weight loss center/spa thing. Sam and Dean get jobs as a personal trainer and a lunch lady, respectively. Undercover, they discover that Maritza, one of the owners of Canyon Valley is a Pishtako, a Peruvian monster than sucks the fat from unsuspecting victims. This particular Pishtako is sucking fat, but isn’t killing people; she only sucks a little bit of fat to satisfy herself, while also helping people lose weight. The bad guy turns out to be her brother, Alonso, who hasn’t been able to control himself like his sister. Alonso kills his sisters husband, and nearly kills Sam before Dean kills him.

This “case-of-the-week” was a solid, and fun. There was palpable tension between the two Winchesters, and it made the usually smooth chemistry between Jared Padalecki and Jensen Ackles much more torrid. But, honestly, that was all secondary; because once again, for the second episode in a row, we got an episode-ending conversation where Sam doesn’t let Dean off the hook. Dean believes, still, that he did the right thing; if he could, he’d “do it all over again.” And there in lies the problem. Sam tells him that he didn’t save Sam for Sam; he saved Sam for himself. Dean scoffs at this. He says that “if the situation were reversed, you’d do the same for me.”

But Sam wouldn’t. Sam says he wouldn’t. Sam would never take away his brothers agency like that, not for his own sake. Sam would never take away someones personal freedom, their choices, because his whole life he’s had his choices taken away from him. He had to be a hunter, he had to help look for his father, he had to let Lucifer posses him, to destroy him forever and ever. Never ever has Sam had a choice of his own; he wouldn’t deny his brother that freedom. He loves him too much.