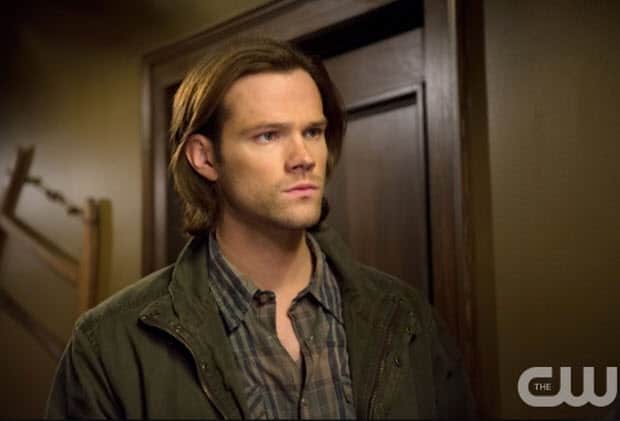 And we’re back! After a brief two week hiatus Supernatural is back on the air. Let’s dive right in.

This is what I call a string-pulling episode; wrapping up loose threads and moving forward character development. This episode (which I thought was going to be a bottle episode for a minute there) deals with the ghost of Kevin Tran coming back to as for help. He comes in just as Dean is apologizing for getting him killed (again), and mumbles a great line about being tired of Dean’s emotional, angsty side moments.

ANYWAYS. Kevin is trapped in the veil. He cannot move on because, as he puts it, “Heaven is closed for business.” The Fall apparently locked out souls, too, so he and everyone else that died after The Fall has been stuck in the veil for months. Considering that over a hundred people die every minute, the veil must be crowded. This is a really cool bit of side plot for the show; what else must be going on with Death and the Reapers and whatnot when Heaven is shut down?

But that’s not what he wants. Apparently, Kevin’s mom, Linda Tran, is still alive. A woman named Candy saw her shortly before she was killed. The boys go to where Candy was killed and summon her, and she tells them that “Linda” was still alive when she was killed and that she was trapped in what was presumed to be a storage facility. There are a few in the area.

Side note: there is a weird bit of exposition where Sam says “I’ve done some stuff up on Candy. She is the mistress of a powerful Senator.” I mean, I guess its plausible, but it was delivered in such a poor way that it really drew attention to it. This kind of half-assed story movement comes up again later.

While the Winchester plot is running, Castiel makes an appearance! He has his own little side arc: Bartholomew’s men capture him and bring him to the Big Bart himself. Bart is receptive of Cas hugging him and all sorts of things. Bart, apparently, had been part of Cas’sarmy way back when. When Cas let, he murdered a bunch of captive angels. This creates tension between Cas and Bart and blah blah blah blah blah Bart tries to get Cas to kill an innocent angel to prove his loyalty so they can go after Metatron blah blah Cas refuses. Cas refuses to kill anymore angels, and takes a stand. He beats the crap out of Bart and then is forced to kill him when Bart wont stop. Cas gets new followers from Bart’s army (only three, at the start. Cas has his own faction now).

The dialogue for the Bart character is super hit or miss. I don’t know what they were going for. It seemed like a mixture between Castiel’s early speech patterns and a little kid. That would be kind of cool, actually; portraying Bart as the little brother trying to impress big brother Cas. But it’s just so bad.

They get to the storage facility, make an okay joke about hipsters in glasses, and the brothers split up to go search two different parts of the facility. This, of course, means that one of them is going to be captured and be forced to listen to a villain complain and monologue. My money was on Dean because he went with the storage clerk, who (SURPRISE!) turns out to be working with Crowley. Sam is the one who finds Mrs. Tran, and he is the one to break the news to her that Kevin has been killed. It’s an interesting moment. Sam and Mrs. Tran share a cool few seconds as they process what he has just told her.

Dean is indeed captured by the storage clerk. The clerk tries to make a phone call by murdering his colleague and using his blood (there has to be a better way. Hotmail, maybe? HA!) to contact Crowley. Dean somehow convinces him to not call Crowley by telling him that he and Crowley are “thick as thieves” now. And for some reason, the clerk believes him and just tosses the bowl of blood away and begins to rant. I have a few questions:

First of all, what was Dean trying to accomplish? He’s heard this dude rant about his displeasure at being left at the storage facility to guard the prisoners. Why would he tell him that his whole work here was, ultimately, for nothing? Why piss him off?

Second of all, Crowley and Dean ARE thick as thieves! Why not let him call so he can, I don’t know, save your life?! I think I’ve made it clear in my reviews about how I’ve been displeased with how the Dean character has evolved in relation to the Sam character has evolved. But Dean isn’t an idiot; he’s smart, strong, and resourceful. This is just bad writing and Jensen Ackles sells it hard. Good on him for being a professional. Bad on the writers for not.

The episode ends with Kevin going off with his mom. Dean warns her about the possible outcomes, but she takes him anyways, which of course she should. We all would, just to spend more time with the ones we love most. Kevin tells Sam and Dean to stop being stupid and to get over whatever drama is between them. At first, it seems like they take his advice, which really pissed me off. For once I want this show to stop punting the problems between the brothers. I don’t care if they reconcile and start sharing a room; I just want these wounds to be taken care of. The characters deserve it.

Hopefully we will get into the meat of just where in the world these arcs are going next episode. While I am enjoying this season for the good it brings to the table (angel infighting, actual Winchester emotional development, Castiel’s development) I thought I’d have clearer picture of where we were going.

That’s it for tonight. Next week we’re getting the Snooki episode (I think) so that should be super duper fun.