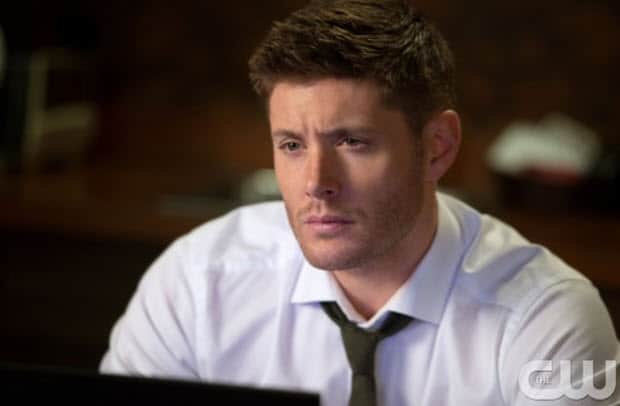 First of all, holy crap, this episode was hilarious. This episode had some great quotes: “It’s pronounced ‘meme’, Ed. The second ‘e’ is silent,” made me burst out laughing.

Here are some of the more memorable ones:

“I just got punched right in the feels.”

“Woods are where trees hang out.”

“We’re gonna need snorkels because we’re gonna be swimming in the p-“Â “I thought you boys might be thirsty.”

“There is a formation of sticks in the shape of a pile.”

Those quotes alone make the episode worth watching. But there is some muscle resting on those comedic bones. LETS DO THIS.

Tonight we saw the return of the Ghostfacers. You remember them, right? Two bumbling idiots named Harry and Ed are trying to get famous by being ghost hunters. The Winchesters first encounter with them lead to one of the funniest episodes of the show. The ‘Facers (you like?) are in the process of investigating a haunted house and come across the Winchesters.

The episode is almost exclusively shown through the handcam of one of the ‘Facers, and it changes things. For example, Sam and Dean curse! They bleep it out, but it really gives a different view of Supernatural. I can’t even tell you how many times I’ve shaken my fist at the sky over the fact that the show isn’t airing on HBO or Showtime. It sure would’ve been a better watch the last the four seasons of Dexter.

Whatever. Anyways, point is, these guys are morons. They put the boys in danger (and in their second appearance they have a team and meet Castiel!) but we haven’t heard much of them for a few seasons. They reappear in a town where a young woman was murdered by what appears to be a ghost, but the ‘Facers know better. They think it’s the Thinman, a slenderman AU who appears in the backs of tons of photos. The ‘Facers claim to fame when they meet up with the Winchesters this time is that they wrote the book on this guy, literally.

Not all is well between the ‘Facers, though; Harry (the non-bearded one) apparently lost his fiancÃ© when he decided to go after Slethinderman with Ed, and their whole team besides the two of them quit. Soon after they arrive, another person is killed by the Slim-man. Ed, who was already spooked, thinks they should give the case to Sam and Dean and skedaddle, but Harry convinces him otherwise.

Harry is misinformed, however, because it isn’t actually Thinman, because Thinman doesn’t exist. Ed created him so that Harry wouldn’t leave him and marry his fiancÃ©. Ed rationalizes it because he says he was “saving” Harry from a boring job and life, but it’s clear he did it because Ed wouldn’t have anyone else. It doesn’t take a genius to see that this a very on-the-nose parallel to the brothers Winchest, but it works because its true. Harry is disgusted and hurt, and he basically quits Ed.

As it turns out, it’s not even a supernatural occurrence that’s killing people; It’s two loser friends who are pulling a “Scream”, as Dean says. They were invisible, so they decided to make people notice them. They pose as Thinderman and kill those who don’t give them what they want: the girl was killed because she wouldn’t go out with one of the guys, and the other man was killed because he was a douchenozzle of a boss. Point is, these guys are bad news.

This was one of my favorite reveals that Supernatural has done over the last few years, because its so uncomfortable. Sam and Dean have had a pretty strict “no humans” policy, because, well, they’re monster hunters. But they are forced to kill the two, with a great and graphic scene of Dean forcing a man to slowly stab himself in the heart. Harry, in defense of Sam and Ed, shoots the other dude and kills him. Great acting all around; all four men look horrified at what has transpired. After it’s all over, Harry decides to leave Ed, and catches a ride with the Winchesters.

This episode was good; a solid B+. The moment where the boys and ‘Facers are forced to kill two humans is really emotional. Sam gets a little play with Harry in discussing Ed’s betrayal. Dean and Sam get to see their spat from a more objective point of view. The bad parts of the episode, like the occasionally stilted dialogue (featuring the constant reminding of names. Stop ending sentences with each others names! Jesus!) or the rushed pace of the first half were much outweighed by the good.

Supernatural hasn’t been profound in a long time; nine seasons and approximately a billion episodes will do that. But its a show worth watching because, when the show gets it right, they nearly always hit the jackpot. For the first time since forever, I feel Sam and Dean are at least reading the same book, if not on the same page.

That’s it for this week, and the next two, as it turns out. I wont be seeing you guys until the show returns from another two week hiatus (ugh) on March 18th.