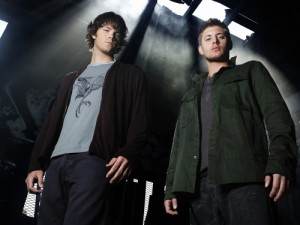 Earlier today we announced that Supernatural has been renewed for a sixth season (along with several other CW shows). Now the network has a behind the scenes video with Jim Beaver (who plays Bobby Singer). He took a little tour around the set with his camera while they were filming episode 5.15 “Dead Men Don’t Wear Plaid”, which will be airing when the show returns on March 25 (check out a promo for that new episode).

You can also see Jared Padalecki and Jensen Ackles in the video. I’m pretty sure one of my guy friends has a huge crush on them. He recently told me “I would love to work on that show…those guys are hilarious”. I’m fairly certain that was code for “Ackles has nice biceps”. I’ve known this guy for a long time, I can read between the lines.