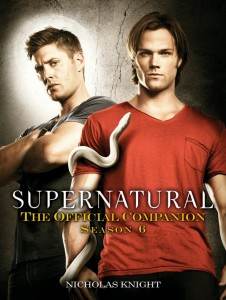 If you like Supernatural, and the ancillary products that go along with the show, you’ve probably come across one of the Official Companion Guides for the various seasons. Released by Titan Books, the season 6 guide follows the templates of the earlier guides. Each episode is laid out with a short summary and behind the scenes information is shared by writers, producers, actors and other crew members. Character summaries are also provided, with the actors sharing information and their thoughts on the season-long plots. Highlights of the season 6 guide included an extended look behind the scenes of the hilarious meta episode “The French Mistake”.

The guide is filled with a lot of background information you might not otherwise know. Want to know how they found a field with crop circles for “Clap Your Hands if You Believe”? Or why the little fairy who beat up Dean looked the way she did? Do you know how they made it look like they were dissecting Samuel Campbell’s head in episode 6.16? The guide is chalk full of answers for questions you didn’t even realize you had. Overall, it’s interesting to learn about all the little intricacies, details and sheer amount of work that go into making a genre television show like Supernatural.

Supernatural: The Official Companion Guide Season 6 will be released on September 27. You can view it on Amazon

(Note: the real cover of the book is the photo you see above, not the photo on Amazon, but that absolutely is the book on Amazon).

As a bonus, we have an excerpt from the guide on page 2 (click the arrow below to read it).

In addition to the season companion guide, a new Supernatural tie-in novel was recently released. Called “Night Terror”, this case takes place late in season 6. Bobby tells the Winchesters to high-tail it to a small town after realizing that it’s experiencing a wave of very strange occurrences. There’s a car with no driver that is killing teenagers and a giant tarantula on the loose, and that’s just for starters. The brothers quickly realize that reality is a very fluid concept in town. Somehow, everyone’s worst nightmares are coming true, only no one knows why. One by one, we’re introduced to the town’s inhabitants and the things they dream about or fear. Soon, Sam and Dean realize that a monster is feeding off the town’s citizens, making their dreams a reality, and it’s up to the brothers to stop it.