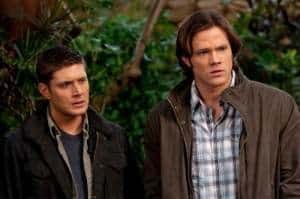 Season 6 seems to be the time for returning guest stars for Supernatural. First Rufus appeared in episode 4 “Weekend at Bobby’s”. According to Jim Beaver’s Twitter and some set photos we also know that he’ll be appearing in episode 16 “…And Then There Were None”.

We know that Genevieve Cortese (who played the second Ruby) will also be making an appearance in episode 15, called “The French Mistake”. This will be the meta episode (read more details here).

Those of you who lamented that Ellen and Jo didn’t return in the episode when the Winchester boys went to Heaven and were reunited with Ash will be happy to learn that Ellen will be returning. Samantha Ferris confirmed via Twitter that Ellen would be making another appearance on the show. She didn’t provide any details, so I guess we’ll have to speculate as to Ellen’s return. Will she be a ghost? I don’t think it will be an alternate reality because the episode she’ll appear in will be pretty close to the meta episode which will take place in an alternate reality. Ferris didn’t mention anything about Alona Tal returning as Jo, so I’m not sure whether we’ll be seeing her again. But you can catch Tal on new episodes of Pretty Little Liars. She’ll be making an appearance starting on tonight’s episode.

Rob Benedict was also recently interviewed before the Golden Globes and hinted that Chuck may likely be returning later this season. Let’s assume that Chuck is indeed God. Will they bring him back to address the war that’s going on in Heaven, since Castiel and that situation will be dealt with a lot more in the second half of the season? Will the answer to whether he is God finally be put to rest? You can watch the brief interview here.

Finally, actress April Telek has also confirmed via Twitter that she will be making a guest appearance on the show. It looks like she’ll be appearing in the Western episode, since they just finished filming episode 16 and the Western episode should be up next.

Supernatural returns with all new episodes on January 28. Watch a promo for the upcoming episodes here.