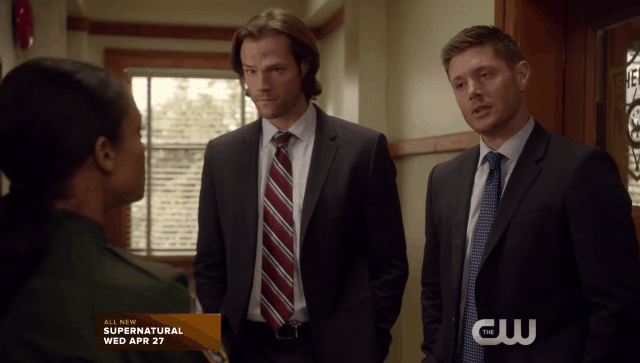 Last night’s supernatural was many things. It tried to be a thriller and a cop procedural. It tried to tell a story about weird zombie-alien-sex monster hybrids. And it all fell apart. I’ve seen the show try to do all kinds of weird things to great success. But this episode is anything but a success. The dialogue is unnecessary long and drawn out. I believe that this time they took it all way too seriously. Honestly, the episode could have done with some much needed humor. Instead we get 2 grim hunters with a personal vendetta against the chitters. While the hunters are good characters and their interactions are interesting to watch, they don’t really measure up to Supernatural’s long history of great supporting characters. So, the episode is basically Dean and Sam teaming up with the hunters to hunt down the chitters. What follows is Dean and Caesar running around getting attacked while Sam and Jesse take about 5 minutes to question some old man. And the episode is exactly that, just one long drawn out conversation with some zombies thrown in.

Don’t get me wrong. This episode does have some saving grace. The hunters Caesar and Jesse are ok one time characters. Sam and Dean’s talk about karma made for a great moment. But that moment absolutely vanished when the case began. It was one long session spent questioning all kinds of people.

If you were hoping for this episode to be more than just a filler, then you’ll be disappointed. Scrap that, it’s worse then the usual filler we have to put up with. “The Chitters” is easily the worst episode of Season 11. And I thought the show would only get better. I’m a bit apprehensive about future episodes because the show had an opportunity to set a good pace after the hiatus but it threw that opportunity in our faces. There is absolutely nothing that makes this episode worth watching. Just wait for next week instead.

Supernatural airs Wednesdays on 9/8c on The CW.

Sam and Dean meet some hunters, make really long conversations, kill an alien-zombie and burn a body. That’s about it.