Well this is interesting. Cinema Today is reporting that highly acclaimed Japanese anime studio Madhouse is producing a 22 episode season of Supernatural that will cover the first two seasons of the cult CW demon-hunting favourite starring Jared Padalecki and Jensen Ackles. According to their website, this would be the first overseas drama to ever be developed by a Japanese animation studio.

‘Supernatural the Animation’ will not only remake episodes of its live-action source, but will also contain original stories never seen before. The new original episodes will focus on the boys’ young lives and the adventures of secondary characters. It’s coming to Japan in DVD and Blu-ray formats on January 11, 2011. Warned Home Video is behind the release, and Supernatural mastermind Eric Kripke is credited as the anime’s creator, which bodes well for those hoping the series is kept firmly in the show’s continuity.

According to the Anime News Network — 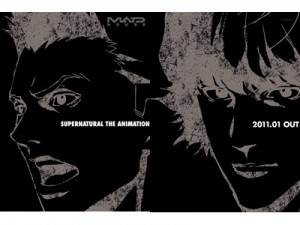 Supernatural returns this fall for its sixth season.