Ten days ago we posted some spoilery photos from the Supernatural set. Now, thanks to Artic Front’s Flickr, we have ten additional photos from recent filming for the show. We’re not sure which episode this is from, but enjoy them anyways. I’ve asked this before, but when are the boys going to do a job in a warmer climate? It must suck wearing all those layers all the time. Do they not have demons in Florida or something? The one time they went to California doesn’t count – the weather looked terrible.

The sixth season of Supernatural will premiere on Friday, September 24 at 9:00 p.m. 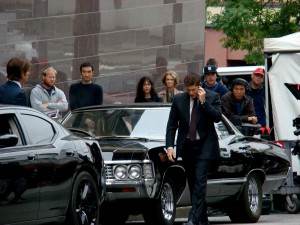 Returning for its sixth season, this haunting series follows Sam and Dean Winchester, two brothers bound by tragedy and blood to their dangerous, other-worldly mission. This past season, Dean and Sam faced their toughest foe yet: the Devil himself. As the Apocalypse raged on around them, the brothers, aided only by a dwindling band of fellow hunters and rebel angel Castiel, sought a way to stop Lucifer and save the planet. Ultimately, they discovered a way to force Lucifer back into Hell and end the Apocalypse – but at tremendous cost: Sam’s life.

Season six will be a season of mystery and shadow. Heaven and Hell have been left in complete disarray since the apocalyptic events of season five. And now, monsters, angels and demons roam across a lawless and chaotic landscape. And so Dean Winchester, who has retired from hunting and sworn never to return, finds himself being pulled back into his old life – pulled back by none other than Sam Winchester, who has escaped from Hell. The two reunite to beat back the rising tide of creatures and demon-spawn, but they quickly realize that neither are who they used to be, their relationship isn’t what it used to be, and that nothing is what it seems.