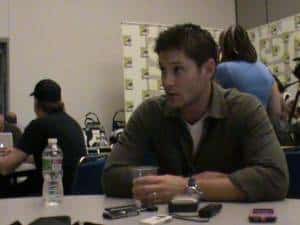 No newly fractured finger was going to stop me from attending the Supernatural press room at Comic Con on Sunday morning (mostly because I was waiting to return to Canada to go to the hospital because it wouldn’t cost me anything). It is, however, making this post extremely difficult to type.

But the press room was probably the coolest thing I’ve ever done. Ever. Jensen Ackles, Jared Padalecki, Jim Beaver, Misha Collins, Eric Kripke, Ben Edlund and Sera Gamble were all present for round-table discussions with me and other reporters. So do I go the serious journalist route and tell you about season 6 (including spoilers, but those will be marked), or do I squeal like I did when I was 11 and first attended a New Kids on the Block concert?

Ahem, now onto serious journalism. I’ve attached videos below of the individual table interviews. Sometimes you can’t hear the question from the other reporters, but the audio from the producers and actors is fine. But let me summarize. First of all, everyone on the cast and the producers are really nice, and funny (although Misha in particular is hilarious).

I don’t think it’s a spoiler to reveal a bit about what we’ve already heard about season 6: namely that the show is essentially being rebooted. Kripke kind of referred to it as a movie sequel. The season is meant to be a sort of “film noir style” (which Misha said was perfect for his character because he already has the costume) and will heavily explore the mythology and origins of monsters and other demons.

I listened to our readers and told Kripke that a lot of people felt that Dean’s importance in the apocalypse had been played up in seasons 4 and 5 and then his importance was down-played in the end. He, however, has a completely different interpretation of it. He said that the show has always been family – not about one brother over the other, but about both of them. Salvation of the planet depended on both of them acting equally. Dean’s decision to sacrifice himself and go to Sam in the end (the love and forgiveness he had built for Sam over years) WAS the fulfillment of his role in the apocalypse. And that those actions were as important as anything else Dean could have done as Michael’s vessel or any other role.

Jim assured us there would be no more kissing between Bobby and Crowley (for all of you who had hoped). He also praised Jensen’s directing abilities (so did the rest of the cast, actually). Jared talked a lot about Sam’s state of mind after returning from hell, but I’ve included that information below in the spoilers, just to be safe.

I asked Ben Edlund a question I had been dying to ask: how would the series have ended if the fifth season finale had been the series finale? I should have asked Kripke this, because Edlund wasn’t 100% certain, but he said that Sam probably would not have gotten out of hell. I told him that would have been a really sad ending.

Kripke and Gamble also said they have no idea whether they’ll get another season, but told us that the storyline has certainly been designed to go on longer. When Gamble was asked whether we would see the Ghostfacers again she said she had hoped they would be back, but they’re web superstars and they’re not sure yet what role they would play. She also said she would hope to see young John and Mary if they can do another flashback episode.

I also filmed and took photos during the panel itself and plan to post those soon. The panel was particularly funny, so I think you’ll definitely enjoy that.

FYI, Gamble says one NSFW word during her interview.

By the way, Jared’s dimples? So cute. I can’t even tell you how awesome the whole experience was.