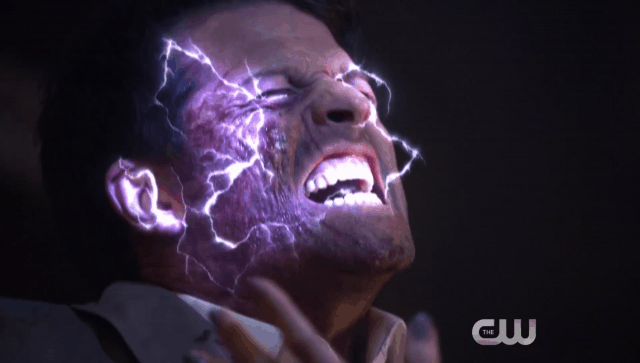 Looks like the CW can’t resist a good pun, can they? They’ve released a preview for the much-hyped upcoming episode of Supernatural. And boy, it looks to be a shocker(Pun Intended). Looks like God isn’t quite feeling up to facing his dear old sister. So what does God do instead? Cruise around with the Winchesters and chat them up of course. Oh, and he eats Popcorn too. What a sight. But it looks like Chuck doesn’t have to go looking for Amara. Because Amara finds him instead. Some flashes follow which show Amara lying down on the ground. Could it be possible that Chuck is stronger than Amara? Because last we heard, it took Lucifer and God to take her down. More Dean/Amara also follows. I wonder why people aren’t shipping it. It’s one hell of a fine ship. But let’s admit, it makes a lot more sense now. Dean basically has a get-out-of-amarapocalypse-free card now. Which must count for something.

Elsewhere Casifer are reeling from a big shock(Please don’t kill me). We’re still not clear on who’s feeling the pain. Is it only Lucifer being tortured? Or is it both Cas and Lucifer? I wonder if Chuck cares about Lucifer enough to mount a rescue mission. Dean and Sam too which is probably more than enough for Chuck. We’re still not clear on the whole ‘God’s Chosen’ part either. It’s definitely not Lucifer. And it can’t be Dean since in God’s eyes, he’s probably a flight risk, not to mention former demon. And Sam’s been Lucifer’s vessel and the one who freed the darkness in the first place. I’m gonna call it here right now and say that it’s either Cas or Michael. Yes Michael, forgot about him did you? Well, the writers forgot about Adam in the first place. They should realize that now is the perfect time to bring back Adam. Adam will basically be Michael’s vessel and later on he can die and come back since that’s what characters on Supernatural do. Likelier it’s Cas though. Think about it, he’s been resurrected by God twice now. That has to count for something right? He is definitely God’s chosen. Or it’s Michael. Take your pick.

Supernatural airs on Wednesdays at 9/8c.