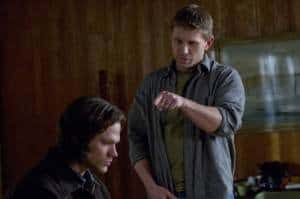 The boys revisit their history in this week’s new episode of Supernatural...in more ways than one. Last week’s episode gave us a spot of fun, but it’s all back to serious business now.

Four years ago, the Winchesters investigated a case of demon possession. They managed to drive a demon out of a man named Jeffrey. Fast-forward to present time, when bodies are turning up that remind Sam of the original case. He’s worried that the demon may have returned. While Dean wants to focus on the leviathans (as you can see from this sneak peek), Sam insists that they have to settle this demon thing once and for all.

But Sam’s method of working the case turns out to be particularly dangerous. In order to help out Jeffrey (who has been locked away in an asylum as a result of his possession), Sam needs to let his own hallucinations come out to play. What does that mean? Well, it means that Mark Pellegrino will be reprising his role of Lucifer, back to torment Sam. With Dean incapacitated (as you can see from the trailer for this episode), it looks like Lucifer is given free reign to torment Sam once again. The question is whether Sam will be able to push the devil aside once the case is solved. How will this impact his recent ability to deal with his Hell hallucinations?

You can watch a producer’s preview for “Repo Man” below. Don’t miss an all new episode of Supernatural on February 17 at 9:00 p.m. EST on The CW.