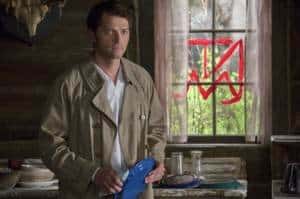 The season 7 finale of Supernatural is scheduled to air this week. Will the Winchesters successfully manage to defeat the Leviathans? Their first hurdle is Crowley, who was summoned and trapped by Dick Roman at the end of the penultimate episode. This is a big problem because Sam and Dean need Crowley’s blood to complete the weapon they need to defeat Dick. All the pieces are there, except Crowley’s blood (as you can see in this sneak peek for the episode). Will Dick convince Crowley to sabotage the Winchesters’ plan?

The other big problem is Castiel, who disappeared two episodes ago after being brought out of his comatose state. Taking on Sam’s mental problems has turned Castiel into a “pacifist”, Misha Collins explains. And he’s not keen on going to battle again. But a clip from the producer’s preview reveals that his new zen state might not be the only reason for Castiel’s reluctance to fight. Is he worried about wreaking destruction and havoc once again?

Watch a preview below for the season finale of Supernatural, airing on May 18 at 9:00 p.m. ET/PT on The CW. You can watch a trailer for the episode here and browse through photos here.

Browse and bookmark our Supernatural page for photos, sneak peeks, reviews and spoilers.